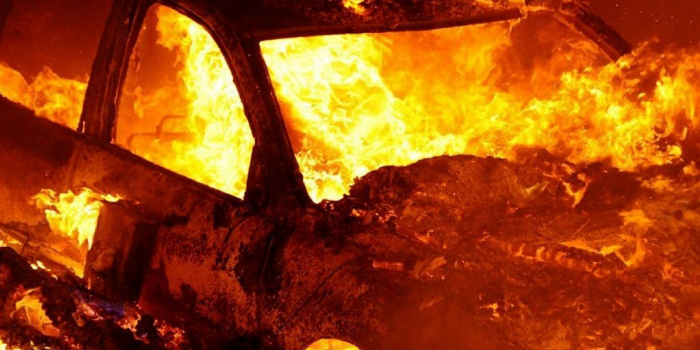 It happened in the yard of his private house. An unidentified person poured an incendiary mixture and set the van on fire.

“The minibus was in the yard, the gates were locked, the wicket door blocked with the bar. It was  about 1.30 a.m. . He left the bathroom, walked through the kitchen, and at that moment, I saw bright light out of the window. I jumped outside and I was horrified - the fire trail stretched from the open wicked door to the minibus, the front of which was already set ablaze,” Oleksander Tovsty said.

The publisher put out the fire on his own.

“The strongest flame was under the hood, the front bumper also burned - it was noticeable that the van was splashed with a liquid, kerosene-like, mixed with gasoline, greasy to the touch, it was hardly extinguished. Then I found an incendiary mixture bottle in the yard,” he said.

Oleksandr Tovsty suspected that arson could have being due to his journalistic activity or his principal civic position. However, he did not receive any direct threats or warnings either before or on the eve of the incident. At the same time, he is sure that it was not a hooligan act, but rather revenge.

He did not appeal to the law enforcement bodies, as he had no confidence the case would be investigated.

A spokesman for the National Police in the Poltava region, Yuri Sulayev, said in a comment to a regional IMI representative that the journalist did call neither the police, nor the fire guards.

As Sulayev said, if he had called the fire guards, the latter would have communicated this information to the police.