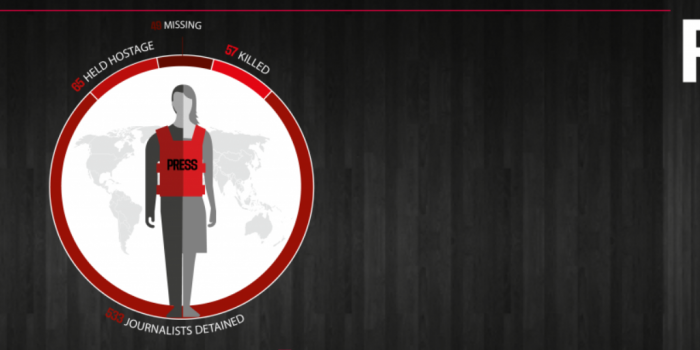 Reporters Without Borders (RSF) published their annual round-up on violence and abuses against journalists around the world. The report is available on the organization's website.

The round-up notes the record number of journalists detained worldwide in 2022 – 553. The number of those killed has increased again this year – to 57– while 65 journalists are being held hostage and 49 are missing.

Last year’s record has been broken again. The total of 533 journalists being held in connection with their work on 1 December was 13.4% higher than last year’s figure. RSF has also never previously seen so many women journalists in detention. A total of 78 are currently held, a record-breaking rise of nearly 30% compared to 2021. Women now account for nearly 15% of detained journalists, compared to fewer than 7% five years ago.

China, where censorship and surveillance have reached extreme levels,  continues to be the world’s biggest jailer of journalists, with a total of 110 currently being held. They include Huang Xueqin, a freelance journalist who covered corruption, industrial pollution and the harassment of women. Also a sign of major repression, the Islamic Republic of Iran, with 47 detainees, became the world’s third biggest jailer of journalists just one month after the onset of massive protests. Among the first journalists detained were two women, Nilufar Hamedi and Elahe Mohammadi, who had helped draw attention to the death of the young Iranian Kurdish woman Mahsa Amini. They now face the death penalty.

“Dictatorial and authoritarian regimes are filling their prisons faster than ever by jailing journalists. This new record in the number of detained journalists confirms the pressing and urgent need to resist these unscrupulous governments and to extend our active solidarity to all those who embody the ideal of journalistic freedom, independence and pluralism," said RSF Secretary-General Christophe Deloire.

The number of journalists killed has also risen. A total of 57 paid with their lives for their commitment to report the news in 2022 – an 18.8% increase compared to 2021, after a two-year period of relative calm and historically low figures. The war that broke out in Ukraine on 24 February 2022 is one of the reasons for this rise. Eight journalists were killed in the first six months of the war. Among them were Maks Levin, a Ukrainian photojournalist who was deliberately shot by Russian soldiers on 13 March, and Frédéric Leclerc-Imhoff, a French video reporter for the TV news channel BFMTV, who was killed by shrapnel from an exploding shell while covering the evacuation of civilians.

The 2022 round-up also reports that at least 65 journalists and media workers are currently being held hostage. They include Olivier Dubois, a French reporter who has been held for more than 20 months by the Support Group for Islam and Muslims (JNIM), an armed group in Mali affiliated with al-Qaeda, and Austin Tice, an American journalist abducted nearly 10 years ago in Syria. Furthermore, two more journalists were reported missing in 2022, bringing the total number of journalists currently missing to 49.

The round-up also takes a look at some of the year’s most striking cases, including that of Ivan Safronov, one of Russia’s best investigative journalists, who was sentenced to 22 years in prison for revealing “state secrets” that were readily available online. This was the longest sentence recorded by RSF in 2022. It also mentions the case of Dom Phillips, a British journalist whose dismembered body was found in a remote part of the Brazilian Amazon, where he had gone to research the attempts by local Indigenous groups to combat poaching, illegal gold mining and deforestation.

Since 1995, Reporters Without Borders (RSF) has been compiling an annual round-up of violence and abuses against journalists based on precise data collected from 1 January to 1 December of the year in question. The 2022 round-up figures include professional journalists, non-professional journalists and media workers. RSF gathers detailed information that allows it to affirm with certainty or a great deal of confidence that the detention, abduction, disappearance or death of each journalist was a direct result of their journalistic work. Our methodology may explain differences between our figures and those of other organisations.