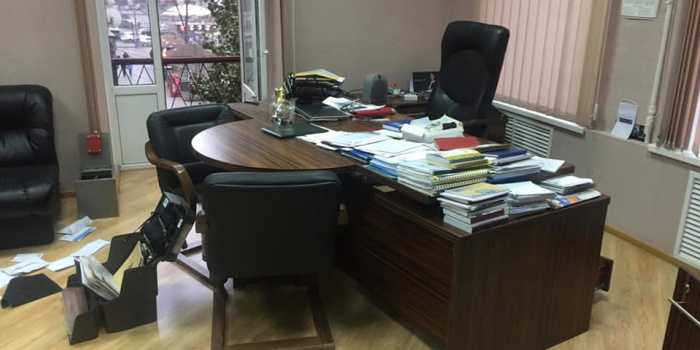 In Kiev, overnight November 28, some unknown persons broke into the office of the head of the National Union of Journalists of Ukraine Serhiy Tomilenko and stole money. Serhiy Tomilenko told it on his Facebook page, as “Detektor Media” reported.

In his comment to “Detektor Media”, he said that he had not been threatened, so he could not say what it might have been related to: "I have no suspicions, because, in fact, I had not once opened the safe before somebody’s eyes. Generally speaking, no threats had been voiced previously. Sure, this is a quite disturbing signal, because we don't know the final motivation."

"The Union of Journalists on Khreshchatyk has been robbed... Last night, some unidentified persons broke into my office and reception desk and committed a robbery. The office safe has been damaged. It contained some official documents and my personal funds ... Some of the documents are on the floor, some scattered on the table, while the drawers are open. We are still to find out what paperwork and valuables have gone missing," he wrote on Facebook on November 28.

The Kyiv police has opened criminal proceedings under Part 3 of Art. 185 ("Theft") of the Criminal Code, as to the police website.

The investigators could establish that robbers had got into the premises through the balcony, they broke the safe and stole money from there. "Right now, the law enforcement officers examine the scene, question the NUJU’s employees, view the video from the CCTV camera," – according to the police website.