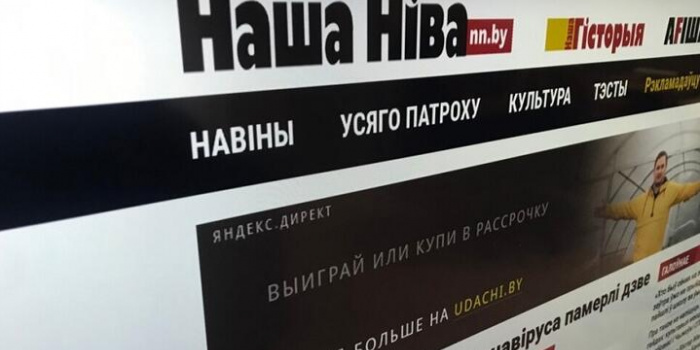 The ‘group of citizens from among the private firm Surodzichy’ has been recognised as ‘an extremist group united with the help of Internet resources, including social networks and messengers’, as Belsat reported.

In fact, the statement refers to the team that has been engaged in running the website Nasha Niva (nn.by) and publishing information on it and its social media platforms.

In November 2021, the Nasha Niva Telegram channel was included in the list of extremist materials.

Earlier, the websites of Belsat, TUT.by, Tribuna, reform.by, Deutsche Welle, Novy Chas, Current Time and others were declared ‘extremist’. It should be noted that the words ‘extremism’ and ‘destructive activity’ are now used by the Lukashenka regime to condemn any manifestation of dissent and protest moods. Thus, anyone who shares news of the ‘extremist’ portals or even a photo with their logo in social networks or even private messages may be punished. Moreover, the Belarusian security officers interpret the law so that they also punish for posts and messages made before the recognition of materials as ‘extremist’. Under Article 19.11, a fine from 290 to 870 rubles may be imposed on the defendant, as well as administrative arrest and confiscation of equipment which is recognised as ‘means for committing a crime’.

On 8 July 2021, searches took place in the Minsk office of the Nasha Niva as well as in the apartments of employees – both journalists and accountants. Moreover, the news website, nn.by, was blocked on the back of the decision by the Belarusian Ministry of Information.

Then Nasha Niva editor-in-chief Yahor Martsinovich, editorial director Andrey Dynko, editor Andrey Skurko, NN chief accountant Volha Rakovich were detained for 72 hours as suspects under Part 1 of Art. 342 of the Criminal Code (‘organisation or preparation of actions that grossly violate public order, or participation in them’). Later, Dynko and Rakovich were released.