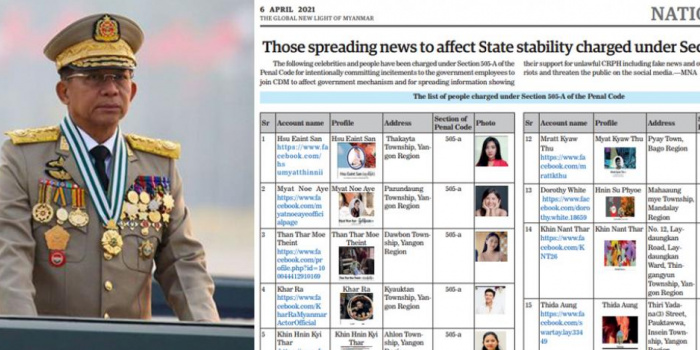 "Amid continuing protests against the 1 February coup d’état, the military took their crackdown to a new level on 4 April when they began publishing lists of journalists wanted for providing information about the pro-democracy protests, along with well-known figures wanted for publicly voicing support for the protests.

"The latest list of “Those spreading news to affect state stability” is broadcast every evening on TV news programmes and is published in the print media. Those named are “charged under Section 505 A” of the penal code, which penalises the dissemination of information contrary to the interests of the armed forces and carries a possible three-year jail sentence.

"At least 19 journalists have been named. They include Mratt Kyaw Thu, a well-known freelancer who recently told RSF about the threat to journalists since the coup, Frontier Myanmar and VOA columnist Sithu Aung Myint and DVB TV anchor Ye Wint Thu.

Two journalists were added to the list on 17 April: Soe Zaya Tun of Reuters and freelancer Lumin Thuang Tun. Democratic Voice of Burma’s Nay Zaw Naing and freelancer Htoo Kyaw Win had been added three days before that. Along with their names, the authorities provide Facebook account details, profile photos and addresses.

"As well as journalists, the list also includes well-known actors and singers and social media personalities, who have had to go into hiding or flee the country to avoid arrest. One of the journalists wanted by the military, Myanmar Post editor Zin Thaw Naing, was not so lucky. He was arrested on 5 April.

“After targeting journalists covering protests, the military have gone a step further and are now brazenly arresting anyone from the media world and anyone daring to contradict the propaganda they are trying to impose on the public,” RSF spokesperson Pauline Adès-Mével said. “It is time the international community reacted. The military authorities must stop violating press freedom in an attempt to hide their worst abuses against civilians from the world.”

"The latest journalist to be arrested is Japanese freelancer Yuki Kitazumi, who was arrested yesterday and was taken via a police station to Insein prison, which is notorious for being used to jail media figures.

"Even former journalists are now being persecuted. Although they had stopped working after the coup, Thin Thin Aung, the co-founder of the Mizzima news agency, and one of her former employees, James Phu Thoure, were arrested on 8 March and have been held ever since although no charges have been brought against them.

"Myo Myat Myat Pan, a former Myitkyina News Journal journalist who had not worked for this outlet since the start of March, was arrested at her home on the evening of 14 April by plainclothes police. According to Reporting Asean’s tally, she is one of the total of 35 journalists currently held in Myanmar, of a total of 65 journalists arrested since 1 February.

"Anyone participating in the dissemination of information not to the liking of the military authorities is exposed to the threat of arbitrary arrest or violence. On 2 April, 11 people were detained at a Yangon market for answering questions by a CNN TV crew which had exceptionally received permission by the military to come and cover the situation in Myanmar. Eight of the 11 were released after three days, but the other three are still being held.

"Since Gen. Min Aung Hlaing took over, the military authorities have gradually brought all means of communication and information under their control. Privately-owned TV and radio news stations have been suspended. Only entertainment can be broadcast. And satellite dishes that can be used to receive foreign TV news channels have been banned in some regions since the start of March.

"Internet access is now only possible via a fixed-line connection and is disconnected every day from 1 a.m. to 9 a.m., posing major problems for transmitting and accessing information in the remoter parts of the country, especially for journalists working there".

Myanmar is ranked 139th out of 180 countries in RSF's World Press Freedom Index.