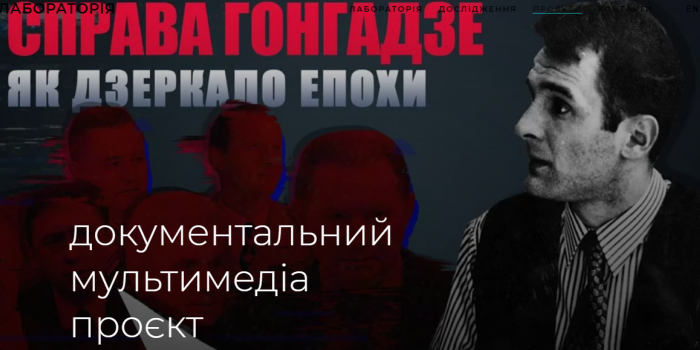 A multimedia documentary project on Gongadze case (The Gongadze Case as a Mirror of an Epoch) has been launched the Public Interest Journalism Laboratory on occasion of the 20th anniversary of the tape scandal.

The multimedia project includes the documentary "Gongadze's Murder: 20 Years Seeking for the Truth", that had been released in September 2020 on Public broadcaster, audio versions of the film in podcast format and 18 interviews with journalists - colleagues and friends of Heorhiy.

“While working on the film, we recorded hours of interviews with almost two dozen journalists who knew Heorhiy Gongadze personally or were investigating the case of his murder. We also spoke to Myroslava Gongadze, Georgy's widow and Olena Prytula, co-founder of the Ukrainska Pravda online publication, "the message said.

18 journalists spoke about how the mass media-and government relations have changed, how the country has been governed in the late 1990s and mid-2000s, and how the biggest first-person scandal in history - the release of tapes recorded inside the president's office - has changed political realities.

“The heroes of the project not only tell in detail about Heorhy Gongadze, but also about Ukrainian journalism and Ukraine under Leonid Kuchma. About who took advantage of the "cassette scandal" and the murder - inside and outside the country. About the forces involved in the political and geopolitical game, and about the evolution of society from "Ukraine without Kuchma" and the Orange Revolution to Euromaidan. And why impunity remains a defining feature of Ukrainian justice, and the unresolved cases of that era still determine our lives, ” the report reads.

We will remind, Heorhiy Gongadze was the Ukrainian journalist who had founded the Ukrainska Pravda online edition. He went missing on September 16, 2000.

In November of the same year, a headless corpse was found in a forest in the Kyiv region, which, according to experts, may have belonged to a journalist. In 2009, the remains of a skull allegedly belonging to Gongadze were found in the Kyiv region.

On March 15, 2008, the Kyiv Court of Appeals found Gongadze guilty of killing three former employees of the Ministry of Internal Affairs' External Surveillance Department, Valery Kostenko, Mykola Protasov, and Oleksandr Popovych. They were sentenced to 12 to 13 years in prison.

On January 29, 2013, the Pechersk District Court of Kyiv sentenced Oleksiy Pukach, former head of the Department of External Monitoring of the Ministry of Internal Affairs, to life imprisonment, finding him guilty of the murder of Georgy Gongadze.