Memorial plaque with accusations put on house of editor-in-chief of Chesno, when alive 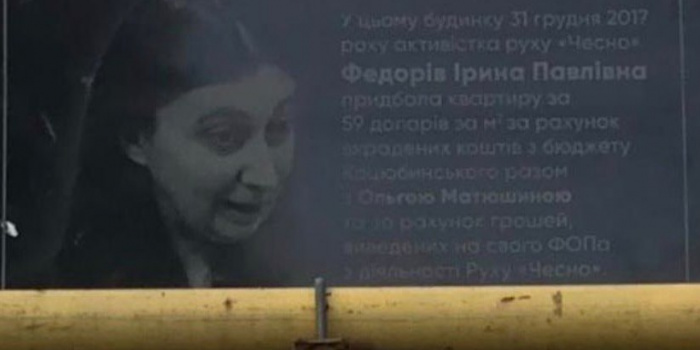 On July 14, in the village of Kotsyubynske in Kyiv region, some unknown individuals installed a plaque that visually resembled a memorial plaque to the victims. Such a tablet appeared on the house where Iryna Fedoriv, ​​the editor-in-chief of the Chesno website, lives. This was reported on the website Chesno.

The text said she had allegedly purchased the apartment at an unrealistic price.

“The plaque appeared the very day when my community and I held a “Kotsyubynske-Kyiv“ rally under the parliament. The action was announced in advance. Irpin developers, who dream of building the Bilychansky Forest and have plots in the forest, are ready to hold more than 20,000 people as hostages without access to medicine and quality access to education, without public transport and other services. Accordingly, because of my active civic position and that me, as a journalist I am covering the life of the community, I constantly face how the “New Faces” party and the leader of this party Volodymyr Karplyuk try to discredit me in vain in the eyes of my colleagues and the community, " Iryna Fedoriv said.

“They torch the cars, beat TEC members, steal surveillance cameras, in particular in my house, cut car tires. Once we met a man with a knife in the entrance. They had been calling me in the past and threatened. I lived with my child and the guards. Because of inaction of the law enforcement system this has become commonplace in the region. All my neighbors know that I have lived in this house since 2007. There is a stamp certifying it it in my passport. As for the value of the apartment, I provided that information publicly, for how much I bought it, and it is absolutely the market price. Now, we will once again get the video from surveillance cameras to find out the evidence base. It is unfortunate that the perpetrators who did this endangered the health of the residents. The plate was mounted just behind the gas pipe. Unfortunately, gas explosions in residential buildings do not teach such people anything, ” Iryna Fedoriv says.

The Chesno movement sees the case as another attempt to intimidate and threaten the activist, who advocates the demolition of the national park in the Bilychansky Forest and tries to preserve it from construction, and advocates a campaign for annexation of the village of Kotsyubynske to Kyiv.

"Ukraine is in a critical condition as to attacks on activists and dropping of investigations on these cases. In addition to physical violence, whistleblowers, journalists, and those who defend the interests of their communities are constantly intimidated, their personal data are made public, monitored and they are harassed, both on the Internet and in real life. I don't want to think about how will end such an alleged "trolling" involving seemed to be a memorial plaque. We appeal to the police and demand a proper investigation into this incident, and we will also provide Irina with an appropriate support, ” Vita Dumanska, Chesno Movement coordinator, said.

Now Iryna Fedoriv has called the police and is preparing a complaint to law enforcement agencies.

In the spring of 2018, Iryna Fedoriv had her electric meter cut off in her apartment. In the summer of 2017, two men punctured the tires of a car belonging to her family.
In 2016, in front of the journalist's house, unknown people painted a fence and doused the prosecutor with a brilliant green. In the same year, someone attempted to break in the premises illegally, with a knife and through a window, in the entrance where the edition of the Kotsyubynsky Community, which is edited by Iryna on a volunteer basis, was kept. In all these cases, as of July 2020, no one has been punished.