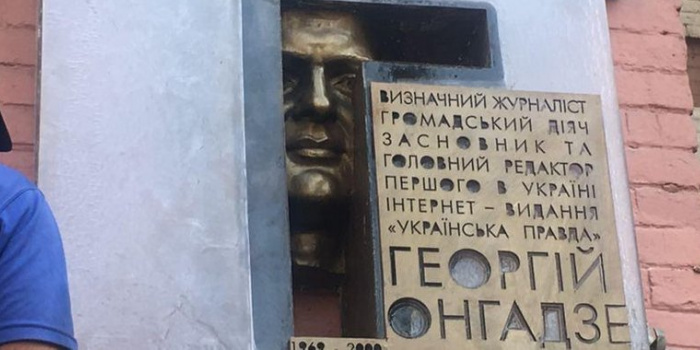 In Kyiv, on September 16 they unveiled a memorial plaque to the journalist and founder of the online publication Ukrayinska Prcavda ("Ukrainian Truth") Georgy Gongadze, according to Hromadske.

A memorial plaque was erected on the facade of the National Union of Journalists of Ukraine on Khreshchatyk.

The event was attended by the lawyer of the family of the murdered journalist Valentyna Telychenko, as well as the editor-in-chief of Ukrayinska Pravda Sevhil Musayeva.

“Georgy called the last project in his life "Ukrainian Truth". He created an Internet resource and believed in its success even when only 1% of Ukrainians had access to the Internet. George foresaw the future. Through his own efforts and life, he opened new horizons for us. George inspired, incited and motivated others to action. And if not with his life, then with his death he changed Ukraine, ”the lawyer said.

As IMI reported, September 16, 2020 marks the 20th anniversary of the disappearance of Ukrainian journalist Georgy Gongadze.

The UA;Pershyy will broadcast the first run of the documentary film of the Public Broadcaster “Murder of Gongadze. 20 years in search of the truth ”.

On September 17 at 19:30 this film will be screened in Mariinsky Park on the summer stage of "Mushlya" near the stadium "Dynamo".