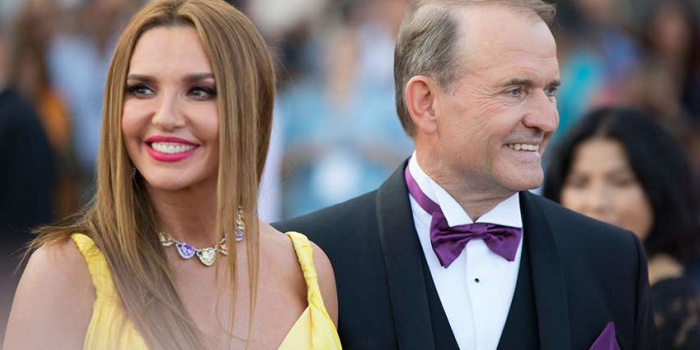 The website of the Myrotvorets (Peacemaker) center has added to its lists spouse of MP Viktor Medvedchuk, TV presenter Oksana Marchenko, as Interfax-Ukraine reported.

"Financing terrorists and Russian occupants. Denial of Russian aggression. Participation in propaganda activities of Russia (aggressor country) against Ukraine. Participation in attempts to legalize the occupation of Crimea by Russian invaders," the rationale for the appearance of Marchenko's profile on the website says.

The authors of the publication also impute her illegal commercial activity in the occupied Crimea, participation in the smuggling of goods and cargoes to the occupied territories of Ukraine, as well as the fact that she is an opponent of the independence of Ukrainian Orthodoxy from the Russian Orthodox Church.

The godfather of Marchenko's daughter is Russian President Volodymyr Putin, the TV presenter declares that she maintains relationship with him.

According to the published information, Marchenko also owns a block of shares in 1 + 1 TV channel.

The website Myrotvorets was created in 2014, positions itself as an online representation of the Center for Research of Crimes against the Foundations of Ukraine's National Security, Peace, and Citizens' Security.