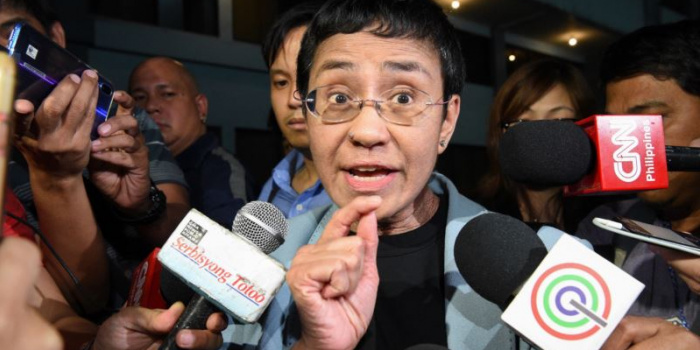 High-profile journalist Maria Ressa has been found guilty of libel in the Philippines' in a case seen as a test of the country's media freedom., as BBC reported.

The former CNN journalist is the head of a news site that's critical of strongman President Rodrigo Duterte.

A writer for the site, Rappler, was also convicted. Both have been released on bail pending appeal - but could face six years in prison.

Ressa denied the charges and claimed they were politically motivated.

But the president and his supporters have accused her, and her site, of reporting fake news.

In a country where journalists are under threat, Ressa's case became symbolic and closely-followed - both domestically and internationally.

"Rappler and I were not the only ones on trial," Ressa told the BBC after the verdict.

"I think what you're seeing is death by a thousand cuts - not just of press freedom but of democracy."

What was she accused of?

The case relates to an eight-year-old Rappler story alleging businessman Wilfredo Keng had links to illegal drugs and human trafficking. It also said he lent his car to a top judge.

The article was written by former Rappler journalist Reynaldo Santos Jr who on Monday was found guilty alongside Ressa.

The prosecution came under a "cyber-libel" law which came into force in September 2012 - four months after Rappler published the article.

But prosecutors said a correction to the story in 2014 - to fix a "typo" - meant the article was republished after the law had come into effect.

The judge on Monday said Rappler offered no proof to back up its allegations against Mr Keng.

Judge Rainelda Montea added that her verdict was based on evidence presented to the court - adding that freedom of the press "cannot be used as a shield" against libel.

While the 2012 law mainly targets cyber-crime, it was criticised at the time for threatening online freedom of expression and data security.

Ressa, 56, and her colleague were allowed to remain free on bail, pending a possible appeal. But if the conviction stands, their convictions carry a sentence of up to six years.

"Our justice system was on trial today," Ressa said after the verdict. "And it just joined the kind of messaging that was pushed out on social media in 2016 [when Mr Duterte was elected]: journalist equals criminal."

Who is Maria Ressa?

Born in the Philippines, Ressa grew up in the US and only returned to the country in the 1980s after the fall of authoritarian leader Ferdinand Marcos.

A former CNN journalist, she founded Rappler in 2012. It is one of the few local sites to openly criticise the Duterte administration and its brutal war on drugs, which has claimed thousands of lives.

The media organisation is among the country's most popular news sites, in part because of its focus on a younger audience and embracing social media.

Rappler and Ressa have also been targeted in other court cases, ranging from tax evasion to foreign ownership violations.