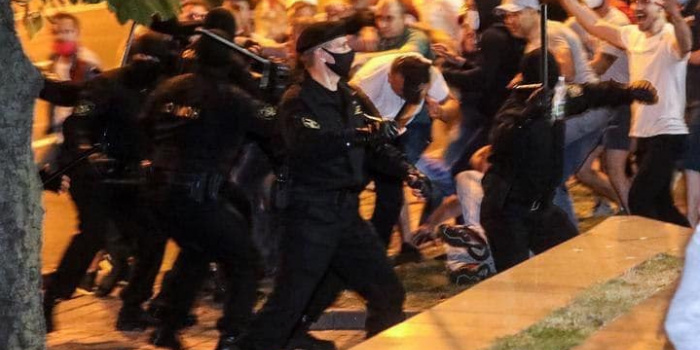 The law enforcers in Belarus have been given the right to ban citizens and the media from taking photographs, filming protests, and audiorecording. Aleksandr Lukashenko allowed the security forces to use military equipment and weapons against protesters and journalists, as BelTA reported.

He signed the law "On Amendments to the Laws on Ensuring the National Security of the Republic of Belarus", which is to regulate the activities of internal affairs bodies and a number of other law enforcement agencies and paramilitary organizations.

It is now possible to conduct a personal search of citizens, their belongings, vehicles during detention. It is expected that law enforcement officers would not be held liable for damage caused by the use of physical force, special means, weapons, military equipment.

The military and special equipment is allowed to stop mass riots and to prevent mass media covering it.

The main provisions of the law come into force a month after its official publication.

We will remind, on August 9, 2020 in Belarus presidential elections took place. The CEC declared Oleksandr Lukashenko the winner, while, according to opposition exit polls, opposition candidate Svitlana Tikhanovska won. Western countries have refused to recognize Lukashenko as the winner of the election. Tikhanovskaya was forced into exile. Authorities brutally suppressed peaceful protests and launched a campaign to intimidate the opposition and the independent press.

In 2020, reprisals against mass media peaked after the August 9 elections. There were 480 detentions of media workers, 97 of which resulted in administrative arrests, at least 62 journalists faced violence while covering rallies. Many of incidents fell under definition of “tortures,” and, at least, three journalists suffered gunshot wounds.