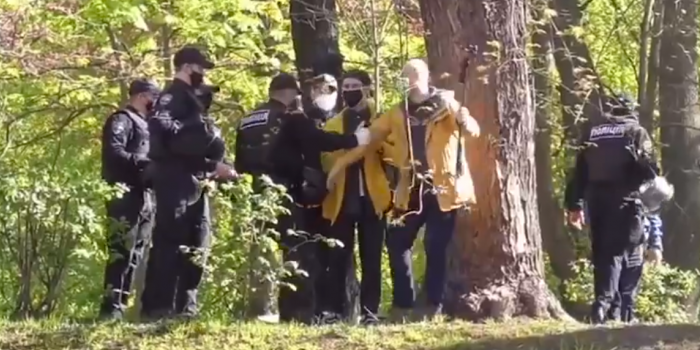 Law enforcement agencies hardly communicated with Bohdan Kutepov, the journalist with Hromadske, and his lawyer regarding the case of the police attack in April 2020 near the Cabinet of Ministers. The journalist said it, speaking to the “Detektor Media”.

He suspects that law enforcement bodies are trying to delay the investigation to dismiss it due to the statute of limitations.

“Zero communication at all. Even Artem Shevchenko (director of the Department of Communications of the Ministry of Internal Affairs - ed.) claimed: "knowing Bohdan Kutepov, one need to check into." That’s the idea! This is because of Artem's personal dislike. It is possible that the Central Office of the Ministry of Internal Affairs is exculpating its employees. Notwithstanding the verbal confirmation of guilt of its subordinates by the head of the Patrol Police, the central office instisted "we will still get it through". After that, everything went quiet, of course, they are reticent, ” as Kutepov said.

One week after the attack, law enforcement officers sent a request to Hromadske with questions, in particular : did the journalist know that at mass events all journalists should be wearing the vests with the words "Press". "They hinted making these questions, formulated in such a way like they would say 'they didn't know you were a journalist, etc.', although I introduced myself for 30 times," Bohdan Kutepov said.

His lawyer, Vladyslav Yukhymenko, also rated the level of communication with law enforcement agencies as poor one (2 out of 10). In particular, last month he wrote a request to the investigator to require access to the case files of the pre-trial investigation, but the State Bureau of Investigation ignored it. So, Yukhymenko filed a motion to prosecute the investigator for inaction, but immediately withdrew it, because he received a response 15 minutes before the hearing.

Law enforcement officers told him about the progress in the case on April 28, but he signed a non-disclosure agreement. The only thing that Vladyslav Yukhymenko was able to inform the edition was that "the pre-trial investigation is continuing." So, it is currently unknown whether the suspicion notes in this case have been issued, whether indictments are being prepared and the case will be sent to court.

The publication addressed these and other questions to the territorial department of the SBI in Kyiv and the Kyiv Patrol Police.

The journalist of Hromadske said that his case was transferred to the territorial office of the SBI, which he learned in September 2020, when he was summoned for re-examination.

“In September, I was summoned by an investigator to the territorial SBI in Kyiv for some further detailing. The investigator told me that the central SBI had done an excellent job, gathered all the information, and identified the assailants. In general, everything was carefully collected and documented, so this is odd enough, why this case was not sent to court, but to the territorial administration. "There is some hidden agenda here," the investigator told me, and hinted that they were trying to wipe it out, "Kutepov said.

He also said that the SBI had problems with his forensic examination, which he passed a couple of days after the attack. The examination confirmed that he had minor injuries. The investigator told the journalist that the results of this examination had not been submitted to the territorial department of the SBI in Kyiv as of September, because they could not decide who should pay for it.

“The Central directorate of SBI opened a case in the evening according to media reports. They wrote that Kutepov was beaten by the police, but they did not beat me as much as they broke the equipment. I have a couple of scratches there. But they opened the case because of the attack and physical injuries, beating the journalist. I think this may be the reason, because it is more to do with the crime, more than with damage to equipment. If there is a court decision, even on parole, he will not be able to hold a position in law enforcement agencies. I think they are trying to drag it all out in various ways and then dismiss it by the statute of limitations, ” as Kutepov said, adding that when he submitted his complaint, he suggested reclassifying the proceedings under the article on material damage in the performance of official duties.

The journalist explained that it was a matter of honor for him to bring this case to a concrete decision. According to him, the policeman attacked him because of the human factor. At the same time, Kutepov pointed out that under Yanukovych, Berkut officers and thugs for hire during the Maidan events"did not behave so blatantly when they knew they were being filmed."

As IMI reported, As IMI reported, on April  29 under the Cabinet of Ministers in Kyiv; the police beat up a citizen journalist with Hromadske, who was on live standup and broke his equipment.