Kremenchuk city council to spend more than 9 M UAH for its PR. Journalists came out to protest 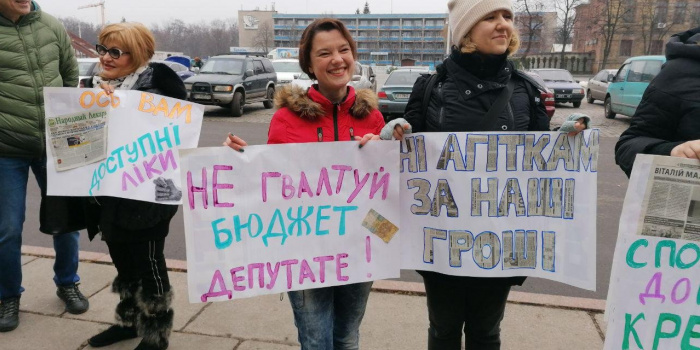 Such a decision was approved by the City Council on December 12, in order to promote information activities of the utility enterprise "Kremenchug City TV and Radio Company".

As local journalists Lariya Goryslavets and Tetyana Donchenko told IMI representative, the media community opposed the adoption of such a decision and went to protest against voting for it. The journalists claimed that a new municipal newspaper was launched before the local elections.

In particular, Tetyiana Donchenko, noted in her blog and speaking to IMI representative said the that "the issue of the KTRC information activity support program was a question of funds, of the city budget."

“According to the city financial administration, the budget hole has already reached UAH 150 million; by the end of the year it will reach UAH 250 million. Financial administration focused on reducing all local expenses. Including, as we know, reducing medical expenses. The City council voted to close dental clinics. Why? Explanation: Because they saved money. The KTRC wants to get 18 million (but we understand that this is not its initiative, someone is behind it, probably the mayor). Including 9.36 million to be spent for newspaper. Do we have normal roads in the city? We have already solved the problems with medicine, haven’t we? Maybe we have bought an angiography system, haven’t we? (We don’t have money for it they say). Maybe they have bought an ultrasonography apparatus for a children's hospital? First of all, whatever we are talking about, we are talking about money, ”Tatiana Donchenko wrote.

According to her, the circulation of the new newspaper with 44 thousand copies exceeds the circulation of all city printed press media. “That is, they are to form a new monopolist, they abuse of the monopoly right to information. <…> What is really going on? I have to talk about censorship in the form of concealment of information of public importance. The Mayor does not held any press briefings, the Mayor does not hold operational meetings, the Mayor does not meet the press, instead he "broadcasts" through the Kremenchug TV and Radio Company. <…> This is an attempt to substitute the media landscape with a parallel reality, ”she wrote.

“We organized a public campaign to persuade elected members not to vote for that program. The formation of the newspaper, of course, is theoretically legitime. That is why our way of combating PR was only through protests and appropriate actions , ” Larissa Goryslavets, a Kremenchug journalist, coordinator of anti-corruption projects of the European Club, told IMI.