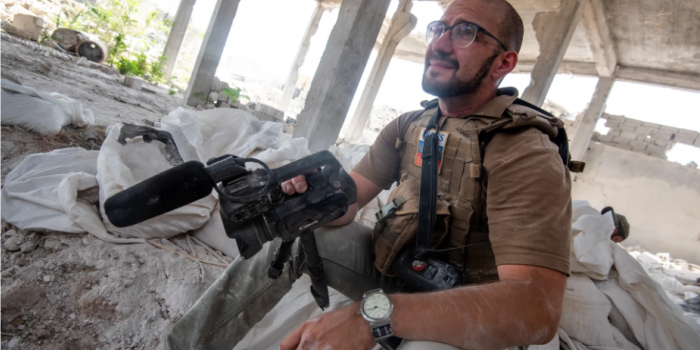 This was announced by "Wagner Group" founder Evgeny Prigozhin, whose video was posted by journalist Juma Abbas.

The cause of death was not specified. In his video address, Prigozhin himself cites Juma Abbas. A number of Russian websites noted that Romanovsky allegedly had cancer.

Dmytro Zolotukhin, director of the Institute of Post-Information Society and "Detector Media" columnist, noted that Romanovsky had worked in Prigozhin's media structures for a long time. In his address, Prigozhin calls the journalist his friend and expresses his condolences for the loss.

As Zolotukhin points out, in 2018, the war correspondent provided information about a "local fixer in the CAR" for the Investigation Management Center, which was financed by Mikhail Khodorkovsky.

"This information was used to monitor the movement of Orhan Jemal's journalist group in the Central African Republic. And then to plan and carry out their murder. Romanovsky effectively enabled the murder of the journalists, which was never investigated," the expert noted.

On July 30, 2018, documentarist Alexander Rastorguev, war correspondent Orhan Jemal, and cameraman Kirill Radchenko were killed in the CAR on their way to a meeting with a fixer named Martin. He was supposed to help them organize filming on location.

The journalists went to the Central African Republic to film a documentary about Russian mercenaries from PMC "Wagner", which is associated with St. Petersburg businessman Evgeny Prigozhin. The project was an assignment by the "Investigation Management Center", which was financed by opposition politician Mikhail Khodorkovsky.

In the official reports, which are based on the testimony of Bienvenue Duvokam, a local driver who survived the attack, the Russians were attacked by 10 men in turbans who spoke in Arabic. The journalists were purportedly killed for trying to resist them. This theory was made up by Evgeny Prigozhin's employees, and it is promoted by official representatives of the Foreign Ministry and the Investigative Committee, according to a report by "Dossier".