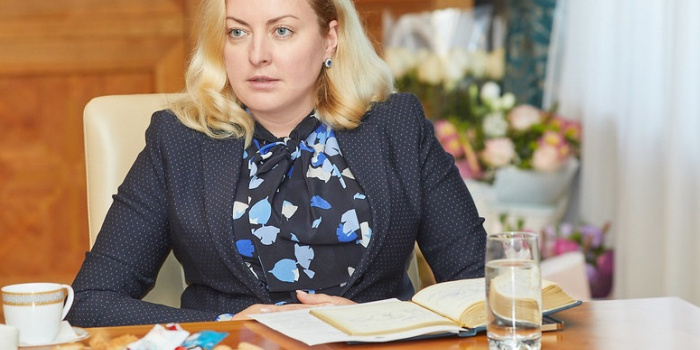 The head of the Kharkiv Oblast Council, Tetyana Yehorova-Lutsenko, wrote a statement to the SBU demanding to check the publications of "Dumka" editor-in-chief Yuriy Larin. The official accuses him of "unfounded criticism".

"Dumka" reported this on its website on December 28, according to Suspilne.

As "Dumka" notes, the head of the oblast council believes that the criticism expressed in the publication's articles is "playing along with the aggressor and openly aiding the enemy." The statement with the SBU was filed in early December.

According to the publication, Yehorova-Lutsenko has grievances with five articles by Yuri Larin which mention that:

Tetyana Yehorova-Lutsenko confirmed to Suspilne Kharkiv that she had filed a statement to the SBU. She believes that "Dumka" was covering her work in a negative way and stresses that it may hold pro-Russian views.

"I can confirm that Yuriy Larin is definitely on someone's payroll. I can tell that the intention in his recent activities has been to discredit me as a person and as the chairwoman of the oblast council," said Tetyana Yehorova-Lutsenko. "It was me who initiated the declaration of the Russian Federation an aggressor country, the dismissal of my deputy, Maloyanovy, the renaming of the Pushkin Theater, and stripping Rainin and Svyatash of the Honorary Citizen title. It all cost me a lot of nerves."

"He never waits for a comment. We had a blackout when he was inquiring about Svyatash, and I said that I would give a comment in the morning. But the day before the session, he had already written that I approved his (Svyatash's – Ed.) vacation. He wrote some nonesense about the honorable Kharkiv citizens, that we were allegedly trying to hide something," said the head of the Oblast Council.

According to Tetyana Yehorova-Lutsenko, Volodymyr Svyatash is currently not on vacation and is not receiving financial assistance.

"This situation is very upsetting to me. I have always been open, gave comments, did not hide anything. I did not understand his position towards the Oblast Council," said Tetyana-Ehorova Lutsenko.

The Oblast Council chairwoman denies the information reported in another article by the publication as well.

"Say, he writes that we do not have the money for the adopted program on Territorial Defense. But that is not true. The program was developed by the military administration. Larin does not mention our intention to allocate the funds gradually over the course of three years. He paints me in a negative light, implying that I am to blame for the lack of money. I think this information is biased. In my opinion, he was paid for this criticism," Yehorova-Lutsenko believes.

She added that she appealed to the special services "with a request to check who is behind him, whether perhaps he wants to undermine my authority or destabilize the situation." "I believe that Mr. Larin should be held accountable for his words. If he works on someone's orders and has some mission regarding me, I don't want to let it slide and watch him pour dirt on me and even choose my worst photos to publish," said the head of the Oblast Council.

"Dumka" reports that editor-in-chief Yuriy Larin has already provided an explanation to law enforcers regarding Tetyana Yehorova-Lutsenko's accusations. The publication listed these explanations in the order of the listed claims.

The editors of "Dumka" note that they consider Tetyana Yehorova-Lutsenko's statement an attempt to put pressure on the journalist and that they reserve the right to appeal to law enforcers and international organizations for support.

In his comment to Suspilne Kharkiv, Yuriy Larin noted that his position has been explained in the publication. Currently, the journalist is waiting for the conclusions of the SBU inspection.