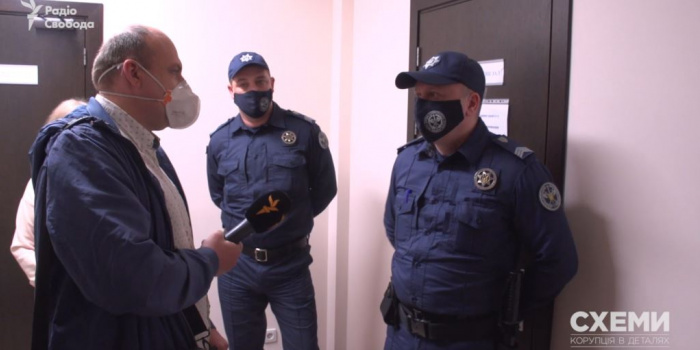 On June 3, the TV crew for Schemes program was not allowed to attend a meeting of the Commission of Civil Service’s Superior Body at High Council of Justice (HCJ), as Radio Liberty reported.

The commission considered the issue of bringing to disciplinary responsibility the head of the State Judicial Administration Zenoviy Kholodnyuk.

According to RFE/RL, despite the letters requesting accreditation, two people iwearing the uniform of judicial guards and three employees of the High Council of Justice did not allow the Schemes journalists to attend the meetings or to ask questions to HCJ members.

Judicial guards barred the way to the courtroom. Among the reasons voiced by HCJ staff were, in particular, lockdown" and the restriction on the number of people who can attend the meeting room, "up to 10".

Later, Volodymyr Vlasov, head of the HCJ Secretariat's of Property Management and Control Department, said that the journalists for Schemes violated "the internal procedure for accesing the premises of the High Council of Justice."

A similar situation happened on June 9, when members of the judiciary together with the aforementioned Volodymyr Vlasov made a "human fence" in the corridor of the High Council of Justice and thus blocked the way for the journalists for Schemes, not allowing them to approach the HCJ members.

Media lawyer Lyudmila Pankratova found such actions of HCJ employees as "an obstacle to the legitime activity of journalists."

“According to Article 30 of the HCJ Law, meetings of the High Council of Justice and the Disciplinary Chambers are held openly. A closed-door meeting shall be held in exceptional cases, if there are grounds specified in the law on HCJ. Thus, Part 2 of Art. 25 of the Law on Information, when a journalist has the right to freely visit the premises of power entity, open events held by them, ”she said.

According to Pankratova, the established work schedule and the procedure for access to the HCJ's office premises, which the staff of HCJ referred to by, cannot set restrictions for journalists to attend open meetings of entity of power.