Journalists not allowed to attend hearing in case of Gandzyuk murder 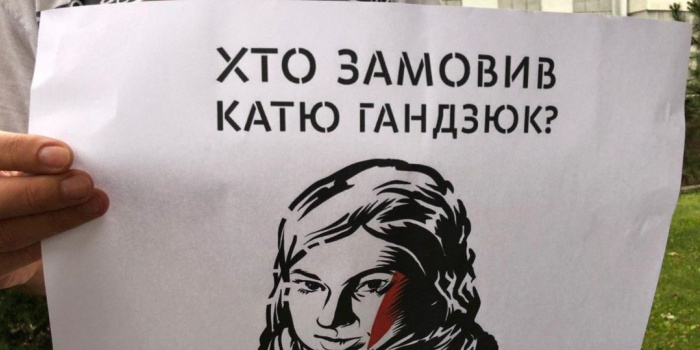 On October 8, journalists were not allowed to attend the hearing of the case of Kateryna Gandzyuk murder in the Dniprovsky District Court of Kyiv. The accused person is the head of the Kherson Regional Council Vladyslav Manhera and assistant adviser to the deputy of Kherson Regional Council Oleksiy Levin. The press was not let in due to lockdown measures, as correspondent of UNIAN news agency reported.

Prosecution witnesses were scheduled to be questioned in court today.

The hearing is being broadcast in another room of the court, but it is of poor quality, and it is impossible to understand what the witnesses and participants in the trial are saying.

We will remind, Ekateryna Gandzyuk died in the Kiev hospital on November 4, 2018. Three months earlier in Kherson, an unknown person doused her with sulfuric acid, she received chemical burns on more than 30% of the body.

On June 6, 2019, five perpetrators of the crime were convicted.

In the case of Gandziuk's murder, several persons are tried: Levin (Moskalenko), a previously convicted citizen, Vladyslav Manhera, chairman of the Kherson regional council, and Ihor Pavlovsky, former assistant to the MP from “Block of Petro Poroshenko”.

On April 27, 2020, the Prosecutor General's Office said the investigation was completed, and the ultimate instigator of that crime was identified:  Vladyslav Manhera, who, with prior conspiracy with Oleksiy Levin, were behind this deadly assault against Kateryna Gandzyuk.

On August 28, the first hearing on the merits of the case against Manhera and Levin took place. According to the court decision, they have to be in custody until October 18.

On September 16, Pavlovsky asked the court to approve a plea agreement and said he was ready to testify.

On October 1, Pavlovsky told the court that Manhera and Levin had ordered an attack on a civic activist. He said Manhera had repeatedly threatened him and his daughter, preventing him from giving evidence before.