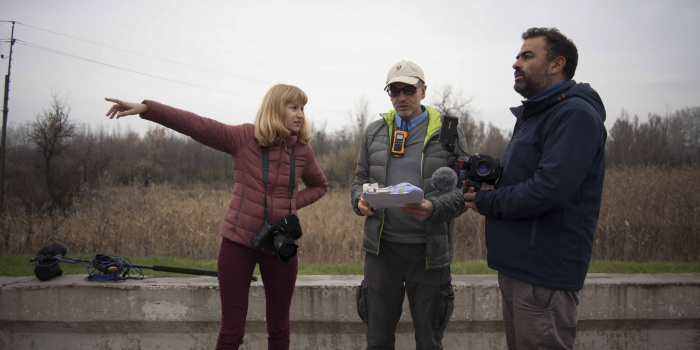 Fundraising has been launched to complete the work on the documentary film “Wrong place” speaking of the Ukrainian National Guard Vitaly Markiv charged with death of Italian photojournalist Andrea Rocchelli and Russian interpreter Andrei Mironov in Donetsk region.

The team of Ukrainian and Italian journalists is working on this documentary: Olga Tokaruk, Cristiano Tinazzi, Ruben Lagattolla and Danilo Elia. The authors investigate the facts that preceded the deaths of journalists and occurred that day, May 24, 2014.

An important part of the film has already been shot in Ukraine (Slavyansk and Kiev), Italy, France, Russia and the Netherlands.

The film is due for release in the spring of 2020, before the Court of Appeal will be issued on Markiv case.

"However, we need your help to complete the film. We want it to come out this spring - before the Italian Court of Appeal decides on the Markiv case. We are working on it as a freelance journalists and plan to get funds for this project through a fundraising campaign. We believe that thanks to our documentary the truth about the circumstances of the deaths of journalists Rocchelli and Mironov to be established. We also hope that it will contribute to restoring justice in Markiv case, ”the statement said.

Journalists are going to use the raised funds to rent cameras, sound and light equipment; translation of the footage into English, Italian, Ukrainian and Russian; editing; mixing and sound design; color correction; original soundtrack and print of advertising material for the movie promotion.

As reported by IMI, on November 20, Ukraine has filed an appeal against the verdict against Ukrainian guardsman Vitaliy Markiv, jailed in Italy for 24 years on charges of killing an Italian photo reporter amid hostilities in eastern Ukraine in 2014.

The jury in the court of Italy's Pavia on July 12, 2019, sentenced the Ukrainian guardsman to 24 years in prison.

On September, the president Volodymyr Zelensky proposed to the Italian PM Giuseppe Conte to form a joint group to investigate into the circumstances of death of Italian journalist Andrea Rocchelli. He spoke of it at the meeting with the Italian PM at the 74th session of the UN General Assembly in New York. At the meeting Zelensky told he expected a comprehensive and objective investigation of the case of Vitaliy Markiv, Ukrainian citizen convicted for death of Rocchelli in Donbas region in 2014.