Journalists in Odessa not let in to city council 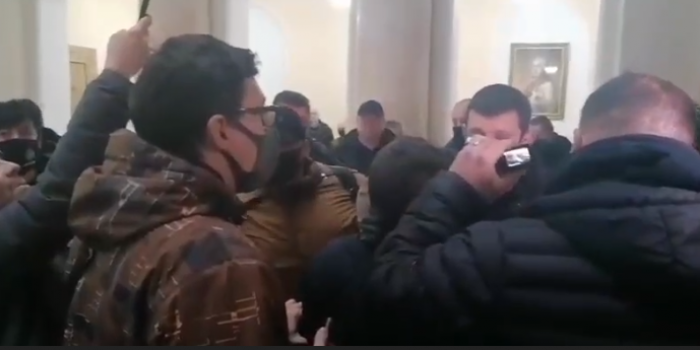 On February 2, security guards of the Odessa City Council did not let in the correspondents for Kanal 7 to the First Deputy Mayor of Odessa, Mykhailo Kuchuk, who had reception day on Wednesday. This was reported to the IMI representative in Odesa region by Kanal 7 special correspondent Yevhen Lysy.

On the video published by the news site USI one could see that the employees of the Municipal Guard barred the way to journalists and told them to "wait for".

As Yevhen Lysy told an IMI representative, the TV crew decided to check whether Kuchuk was holding meetings with Odesa residents or not.

"We were not allowed by the municipal staff, they prevented us from fulfilling our journalistic activities. We were let in only in 15 minutes. Kuchuk arrived an hour later, but he refused to communicate officially in the office, ”Yevhen Lysyi said.

In the Odessa City Council, a representative of IMI was told that Channel 7 journalists were informed about the absence of the first deputy mayor due to a working trip. Having checked the documents, the security guards of the administrative building let the TV crew into Kuchuk's office, where they kept waiting for several hours until the City Council officers opened the door and showed them the empty room.

Earlier, the 7th TV channel reported that the security guards of the Odessa City Council did not allow journalists to attend the meeting of the land commission of the City Council for a long time. As the TV channel's representative was told by the IMI representative in Odesa region, the journalists were able to get to the meeting only when the guards left the checkpoint due to a fight between MP Artem Dmytruk and participants of the land commission meeting.