Journalists covering a rally not admitted to Poltava City Council 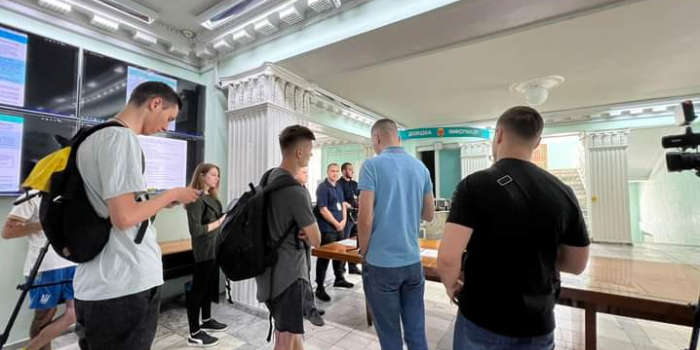 In Poltava, journalists were not allowed to meet with deputy mayor Valery Parkhomenko and the demonstrators.

The incident took place on July 20 at Poltava City Council, where the media workers came to cover Poltava residents' rally against real estate developers. Journalist Anastasia Matsko informed the IMI representative in Poltava region about this.

The journalist said that after the rally, which took place in front of the City Council building, an initiative group of protesters went into the hall to meet with the deputy mayor Valery Parkhomenko. They invited the mass media to go with them.

"But the security didn't let us in, they said it wasn't allowed. We could not pass freely, as the passage was fenced off with desks. When I asked on what grounds we were not allowed in, the guard at the entrance said that there was no such order. He did not specify which order. He ignored my explanations that this was obstruction of the work of journalists," said IMI representative Anastasia Matsko.

The security offered the protesters and journalists to resolve the issue of their presence at the meeting through the City Council's press office.

"We waited about 15 minutes for the head of the Poltava City Council press office Alina Ryabokon. We had to call her ourselves, as we understood that we were losing precious time waiting, because the proactive group of protesters got in at that time. We were asked to wait again. And later we were informed that the head of the press office would not come down to us, because she was at the meeting with the deputy mayor and the protesters," said Matsko.

"It was some kind of incomprehensible comment that does not allow us to properly cover the issue, and therefore to do our job. Even though we had journalist IDs, we were unable to come in and do our job professionally and provide people with full information on the problem," said Anastasia Matsko.

She also said that the media workers wanted to be present during the government's conversation with the protesters, as the reason for the meeting is socially significant. People came because, despite the building being completed and put into operation, they could not move into the apartments, as the City Council did not assign an address to the building. They wanted to hear the reason from the Poltava authorities.

The journalists did not file a report for interference with their professional activities with the police. But they do plan to prepare a collective appeal regarding the unsatisfactory work of the Poltava City Council's press office and the city authorities' communication with the mass media.