Journalists attacked by police officers during rally in Dusseldorf - DPA 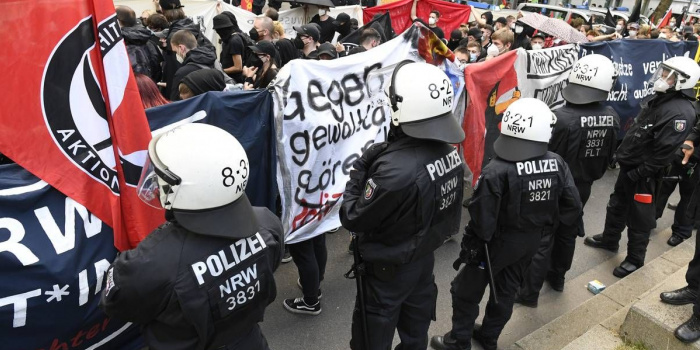 Journalists were attacked by police officers on Saturday during a demonstration in the western German city of Dusseldorf against a proposed assembly law in the state of North Rhine-Westphalia, as DPA news agency reported.

A dpa photographer reported that officials beat him several times with a baton, and at least one other colleague was also attacked.

Just before, pyrotechnics were set off in the ranks of the demonstrators, he said.

Police initially didn’t comment on the incident. There were various reasons for the operation, said a spokesperson for the Dusseldorf police, adding that no injured had been recorded so far.

A police spokeswoman later said that a complaint for suspected bodily harm would be filed against the officer.

Dpa condemned the violent attack on its employee and on other journalists. Editor-in-chief Sven Goesmann called the incident an "unacceptable attack on the freedom of the press."

He also demanded a complete clarification of the events in a letter to North Rhine-Westphalia’s Interior Minister Herbert Reul.

The protest in Dusseldorf, the capital of the western state, was organized by an alliance consisting mostly of left-wing organizations. Larger groups of football fans from nearby Cologne and Dusseldorf also participated in the rally.

The proposed assembly law aims to regulate demonstrations, for example banning uniform or uniform-like clothing, to prevent violent behaviour. Critics however see it as encroaching on the basic right to assembly.

According to the organizers, about 6,000 people were present in the afternoon, with the rally still ongoing. The police has not commented on the number of participants yet.