Journalist with Watchers.Media faced obstruction in courtroom in Kyiv 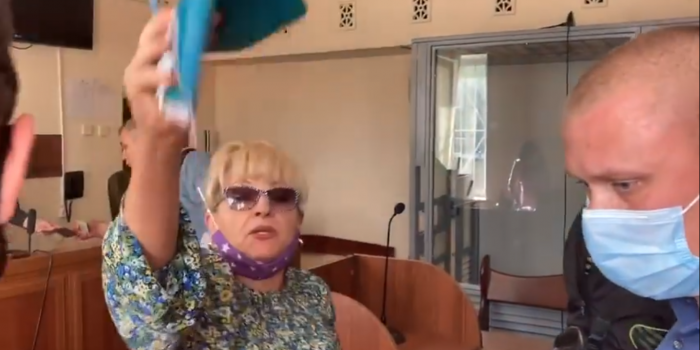 Screenshot from the video of Watchers Media

In Desnyansky District Court in Kyiv on September 23, the accused officers of riot police forces (Berkutoviets) and their lawyer harshly prevented the journalists with Watchers.Media project from work, as they reported on its page on Facebook.

"As to the formal reason, the defender of the accused began to cry that she was not consent to be filmed. But, according to the law, journalists have the right to take pictures in public places, which the court is. A person can really have some objections, but not to be taken on the picture, but to publication of these images. Usually,the  journalists take this into account, as they publish these photos but not showing the persons who were not consenting to publication," the report said.

The edition published a fragment of obstruction of the work of journalists, noting that the incident had signs of an offense and the public interest in this case was prevailing a private wish not to appear in the press.

Journalists called the Kyiv patrol police and were going to file the complaint. According to the publication, the police arrived to the scene and "recorded" explanations, "instead of calling an investigative-operational group and recording complaint about the crime."

The publication noted that the court hearing concerned the case of the attack of the Berkutovites against activists of AutoMaidan (facts originating to the Dignity Revolution).

Commenting on it to IMI, Olga Khudetska, head of the Watchers.Media project, said these were the journalists Alina Kondratenko and photojournalist German Krieger who faced obstruction the courtroom.

Khudetska supposed the police would not institute any criminal proceedings on this fact.

"I see now observing the way they record testimony and fill the papers in, non-willingness to open proceedings and imitation that no crime complaint was filed. I foresee they would call our complaint as an “appeal” in the unified accounting journal and thus they would avoid a compulsory registering of it with the Unified Register of Pre-trial Investigations, "she said.