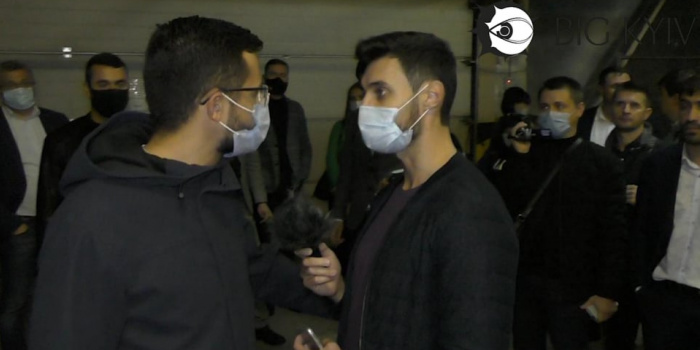 The Internet portal Velykyy Kyiv (Great Kyiv) reported that a police officer had used physical force and interfered with their journalistic activity on October 13 in Kyiv, as to its website.

The incident occurred during a search by National Police investigators at the “Increastar” Business Center, which was part of the business assets of the family of Tetyana Popova, former deputy minister of information policy and a member of the Council on Freedom of Speech and Protection of Journalists under the President of Ukraine.

One of the investigators, who did not name himself, began to behave aggressively and prevented the journalist from exerting his profession, using brute force and pushing him away from the office where the search was on.

Maksym Yuryev, as IMI could find out the name of the journalist, complained to the National Police hotline about interference with his professional activity and asked to identify the assailant.

Maksym Yuryev said, the investigators began to treat him aggressively when he asked about grounds for this search, asked to present him the court's decision, the police officers’ IDs and to name themselves.

"Actually, at first, the investigators behaved politely, but after my questions on the merits, when I asked about the essence of the conflict and the search, they began to behave more aggressively. One of the investigators with a strong physique began to demand that I leave the room, and then simply forced me out of the corridor, despite my demand to show the decision and show his police officer identity card. For me, he still is an unidentified person, ” as Maksym Yuriev said.

At the same time, Yuryev noted, he introduced himself as the journalist: “We introduced ourselves as soon as we came in, as a camera crew of “ Velykyy Kyiv”, me and my cameraman. We had a camera with a tripod and a light. For several times I was asked which edition we aere from. Then, various people, allegedly investigators, repeatedly tried to force us to leave the premises under various pretexts. ”

After filing a complaint with the police, the journalist did not receive any reaction.