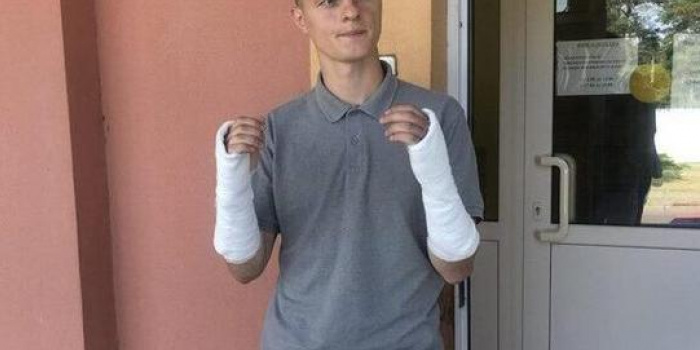 The Investigative Committee of Belarus has denied a journalist from the city of Grodno, Ruslan Kulevych, whose both arms were broken by security forces after his detention, to initiate a criminal case over the incident, as TUT.by reported.

Ruslan Kulevich and his wife Tatyana were detained on August 11 in the city of Grodno in a store where they were hiding with other people. In the store, security officers hit Ruslan on the head, and then pulled him out of the room and put him in a paddy wagon. Tatiana was also detained. She was released late in the evening, and Ruslan was sentenced to seven days for participating in an unauthorized rally.

Ruslan said that he and other detainees were brought to the Zhovtnevy District Police Department.

The journalist recalled how he was beaten: “The door of the paddy wagon opened, I saw two rows of policemen wearing black masks and with batons. I was laid on the ground and my arms and legs were twisted. Everyone laughed and waved their sticks. They did not respond to my cries that I was a journalist. I don't remember whether they beat me there, but at that moment my arms and legs were already sore. Several policemen dragged me to a closed place, where they told me to stand facing the wall. Due to severe pain, I sat on the concrete floor. Within 10 minutes, other detainees were brought there. Most of them were young men who did not understand why they were detained and beaten . ”

The journalist was sentenced to seven houses of arrest, but was released on August 13. It later emerged that the journalist had broken two arms, was hospitalized and spent several days in hospital.

The couple then filed complaint with the Investigative Committee. In November, they received the following answer: “In accordance with the requirements of the Criminal Procedural Code of the Republic of Belarus, we inform you that on the fact of inflicting bodily injuries on you on 11.08.2020 on the basis of paragraph 2 part 1 of Art. 29 of the CPC of the Republic of Belarus, a decision was made to refuse to initiate a criminal case. "