The Prosecutor General's office reported this to IMI.

According to the investigation, the bodies of both women were found on April 7 in a garden, in one of the yards of Shevchenkove village, Brovary district, Kyiv region. They died from injuries due to the explosions.

The criminal proceedings were launched on 8 April under Article 438 p. 2 of the Criminal Code of Ukraine (Violation of the laws or customs of war).

Oksana Haydar was born in Kyiv. She graduated from the Faculty of Journalism of Taras Shevchenko National University of Kyiv. Her father, Yurii Haydar, was the deputy editor of Sportyvna Hazeta. In recent years, she had been living in Moscow, but with the beginning of the full-scale russian invasion, she returned to Ukraine, where her mother lived. The village has been occupied by the russians.

Oksana Haydar was known under the pseudonym Ruda Pani, and published history-related posts on her Twitter account, condemning russia's policies.

She wrote her last tweet on March 11, where she reported on the situation in the russian-occupied Kyiv region.

“Since yesterday, we have no electricity, the Internet connection is barely there. Russians aren't letting anyone leave – they fire at cars and even bicycles, shooting people to death. People can only sit quietly in their homes. The humanitarian catastrophe is a matter of a month, top. I'm deleting Twitter, hope to see you again. Everything will be Ukraine!" Ruda Pani wrote. 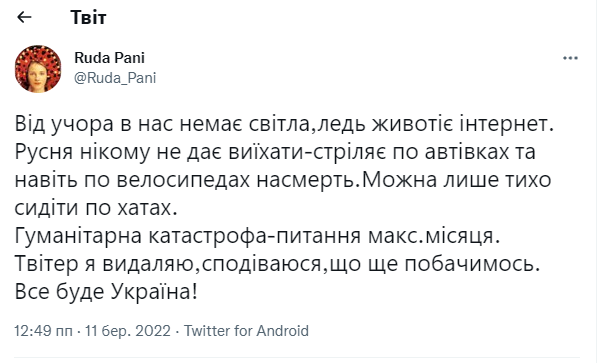