Journalist in russia sentenced to 22 years in prison for treason 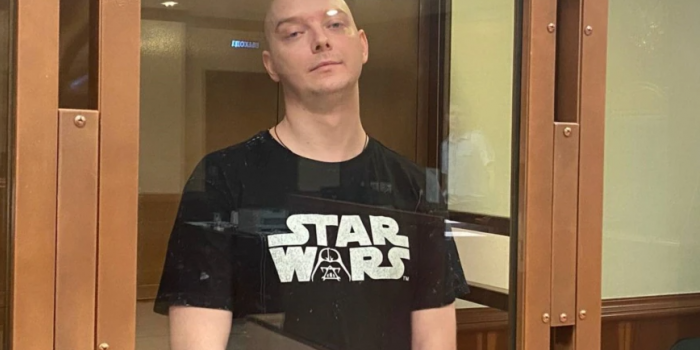 In russia, journalist Ivan Safronov was found guilty of treason and sentenced to 22 years in a high-security prison. The verdict was announced on September 5 in the Moscow City Court, Radio Liberty reports.

Safronov was also fined 500,000 rubles and two years of restriction of freedom after release.

An appeal can be filed within 10 days. The defenders have already announced that they will file it.

The court only announced the introductory and final parts of the verdict, without reading out the reasoning. Dozens of people came to the ruling's announcement: the journalist's colleagues, relatives, and close ones. After the verdict was read aloud, they started chanting, "Free him!"

The prosecution demanded 24 years in prison for Safronov. The maximum penalty under the article on treason in russia is 20 years of imprisonment. Safronov was found guilty of committing this crime twice, which made it possible to increase the term by partially adding the two sentences together. Before the debate, the prosecutor's office offered to reduce the term by half to 12 years in prison in exchange for Safronov pleading guilty. The defendant refused, wrote lawyer Evgeniy Smirnov.

Safronov was found guilty of leaking information related to a state secret to intelligence officers of NATO countries. The former correspondent of "Kommersant" and "Vedomosti," who used to work as adviser to the head of Roscosmos before his arrest, pleaded not guilty. He was detained in July 2020 and has been in the Lefortovo pre-trial detention center for over two years.

The Moscow City Court had effectively begun the hearings in Safronov's case this April behind closed doors. During the hearings, several prosecution and defense witnesses had been questioned. According to the lawyers, they had not shared anything that would have confirmed their client's guilt.

Last week, media outlet Proekt published the indictment in Safronov's case. It implies that the journalist allegedly passed on classified information to Czech journalist Martin Laris and German political scientist Dmitry Voronin, whom the russian FSB considers to be foreign intelligence officers. They deny it. As Proekt writes, even if Laris and Voronin really worked for foreign special services, the indictment contains no evidence that journalist Safronov knew about it. The investigators did not find a single official who would have shared secret intelligence with Safronov.

The journalists managed to find all the information which the indictment calls "classified" in open sources. Safronov himself also stresses this.

Ivan Safronov was the author of several high-profile media publications about the russian army, as well as space and military industry.