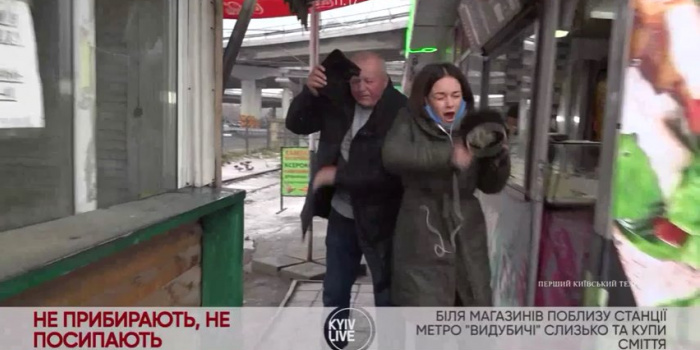 In Kyiv, an unknown man attacked Kyiv Live TV journalist Kamila Mammedova during a live broadcast. The incident occurred on December 14 during an inspection in the area near the Vydubychi metro station, according to the channel's website.

Correspondent Kamila Mammedova tried to find out whether the salespeople who worked near the metro strew sand over the icy sidewalk. Suddenly, an unknown man aggressed her and started beating her and the cameraman.

"However, the offender was overtaken by instant karma and he slipped on the ice and fell straight into a puddle," the channel reports.

The journalist called the police and filed a complaint.

According to the journalist, she did not expect any attack, because the issue they were filming was not provocative. She supposed that the man who attacked them was drunk, because he just came out of the liquor store.

She also said she suffered bruises and swelling on her cheeks as a result of the blows. She is currently in a medical facility.

“We asked people who witnessed his escape, they said that this man ran from the subway towards the construction and industrial zone near Vydubychi. We immediately went there, but could not catch up. In any case, we have provided the police with pictures that clearly show his face, they will already be looking for the attacker, ”the journalist said.

According to the TV channel, the cameraman Nestor Bondarenko was also in a shock, he has no injuries, but the attacker pushed him many times.