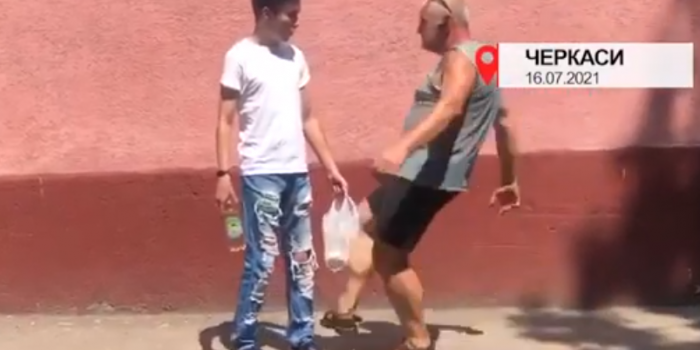 In Cherkasy on July 16, an unknown man beat Vitaliy Hrebinets, a journalist with the local Antena TV company. The incident happened, as Vitaliy Hrebinets made some remarks to that man in the street, trying to stop him being rude to his colleague, woman journalist.

The journalist reported about it to the representative of IMI in the Cherkassy region.

The journalist complained also about the inaction of the police and medics. The incident occurred at noon near the office of the TV company.

"The man grazed his female colleague with a package of water, and she reprimanded him to be more careful, to which he began to be rude and scolding her. Then I remarked to him that he should minde more his Ps and Qs. After that, he started swearing at me, so I started talking to him in high tones, which he didn't like, and then he started beating me, ” Vitaliy Hrebinets said.

The journalist immediately called the police, but law enforcement officers did not come. The crew arrived on the scene after an additional call, more than two hours later. Vitaliy Hrebinets filed a complaint.

"The police told me to undergo a medical examination at the 3rd City Hospital," the journalist said. - However, the girls in the hospital ward of the institution started being rude to me and refused to admit me, referring to the fact that "we do not record beatings." After a long conversation and my request to give me a written refusal, they gritted their teeth and sent me to a traumatologist. And the doctor has already told me that they send the results of the examination to the police themselves (while the girls from the waiting room refused to admit me at all) ”.

As a result of this conflict, Vitaliy Hrebinets noted, he was found to have a soft tissue contusion of his left leg, brain concussion and a skull fracture. According to Vitaly, the police have not contacted him yet. At the same time, his colleagues have already established the identity of the attacker on their own.