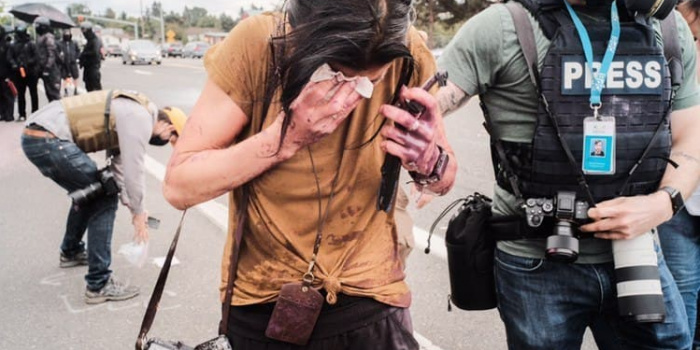 An independent journalist says she was "attacked by ‘antifascist’ protesters" in Portland, where they damaged her property and shot paintballs at her, during weekend unrest, according to reports and details shared on social media, as Fox News reported.

Maranie R. Staab recounted on Twitter how she was "attacked" by alleged Black Bloc protesters, who she described as being "anti-fascist," during Sunday’s opposing rallies. Hundreds of protesters flocked to separate radial left- and right-wing rallies in the Oregon city, where they ultimately clashed.

"To threaten & assault members of the Press is not anti-fascist behavior … To do so under the guise of social justice is a disgrace," Staab wrote on Monday. "To do so anonymously & from behind is pure cowardice."

Photographs and reports from the protests show demonstrators wearing clothing indicative of members of the Proud Boys and Antifa groups, respectively.

Staab described in the post how her phone and camera had been damaged during the attack. She also shared video of the alleged attack, which was captured by on-the-ground documentarian Ford Fischer.

Fischer described in tweets how Staab had approached a group of "[a]ntifascists" to speak with them, "and they shot paint and mace at her and threw her on the ground." They then allegedly fired more additional paintballs at Staab and people who identified as "press."

A spokesperson for the Portland Police Bureau said the office did not have any record of a police report made in this incident but noted that reports had to be transcribed and therefore took time to show up in the bureau's system.

No arrests were made during Sunday’s protests and counterprotests, police said.

"We observed criminal activity, and investigators are actively trying to locate victims and witnesses in hopes that their cooperation will allow the detectives to build criminal cases against those who committed crimes," PPB spokesperson Sgt. Kevin Allen said in an email to Fox News on Thursday. "It’s not unusual for arrests to take place weeks or months later after detectives have completed the meticulous work it takes to gather enough evidence."

The plans for the opposing demonstrations had prompted Portland police to call in all available police personnel. In addition to paintballs, protesters shot off fireworks and similar devices

Portland Police Chief Chuck Lovell said Friday that despite expecting clashes, police would not necessarily be standing in between opposing groups. Speaking in a video shared to Twitter on Tuesday, Lovell described that there were "some confrontations between the groups who physically challenged each other." He said there were "no large-scale acts of violence or property destruction."Similar events in Portland between groups with differing political ideations or affiliations have resulted in violent clashes. Sunday’s event fell on the one-year anniversary of a particularly violent political clash in which the opposing groups brawled on the street next to police headquarters for hours.