According to IMI's own sources, Italian war correspondent Mattea Sorbi is alive and, most likely, is currently in the occupied part of Kherson oblast. He had gone to the red zone without a Ukrainian producer or fixer.

As IMI reported earlier, Italian war correspondent Mattia Sorbi, who had come to Ukraine to cover the russian aggression, went out of touch on August 31. This was announced by the journalist's German colleague Arndt Ginzel on his Facebook page. The same information has been confirmed to IMI by the international organization Reporters Without Borders.

According to the German journalist, on the morning of August 31, Mattia Sorbi texted him that he planned to drive from Mykolaiv to Oleksandrivka, Kherson oblast. This village is in the red zone, approximately 50 km away from Mykolaiv.

"When we arrived in Mykolaiv around 5 p.m. On August 31, Mattia Sorbi was no longer available. We phoned him the day before because we wanted to know how he assessed the situation on the southern front before we continued our journey from Zaporizhzhia to Mykolaiv. The war reporter's phone is still working, but no one answers or reads the news," said Arndt Ginzel. 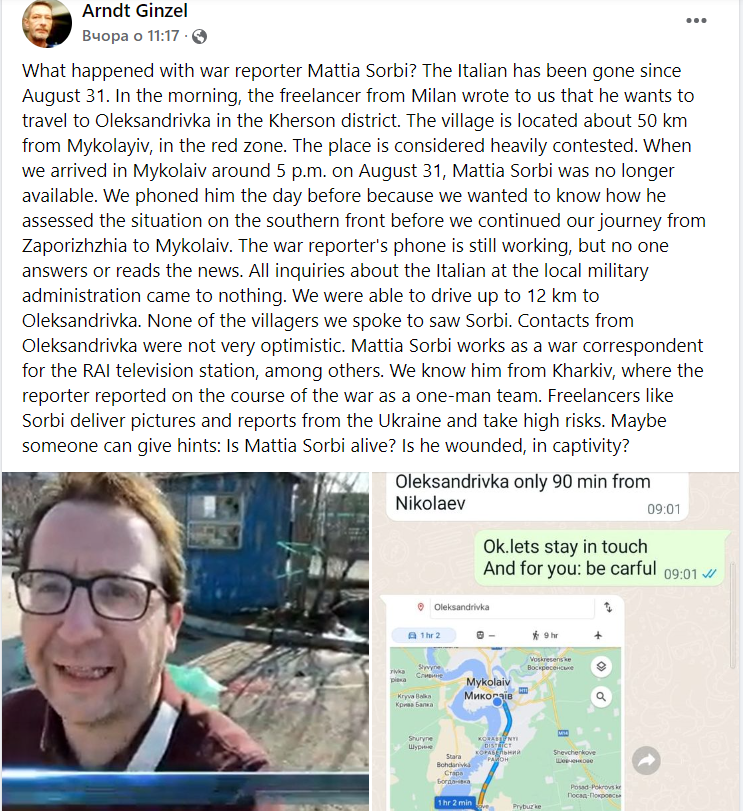 According to him, their inquiries to the local military administration about the Italian journalist yielded no results. "We were able to dirve up to 12 km to Oleksandrivka. None of the villagers we spoked to saw Sorbi. Contacts from Oleksandrivka were not very optimistic," the journalist wrote on Facebook.

Маttia Sorbі is a freelance journalist who, among other things, worked for the Italian TV channel RAI as a war correspondent in Ukraine. In 2014, Sorby worked as a correspondent for the russian war propaganda TV channel Zvezda, which spreads disinformation against Ukraine.