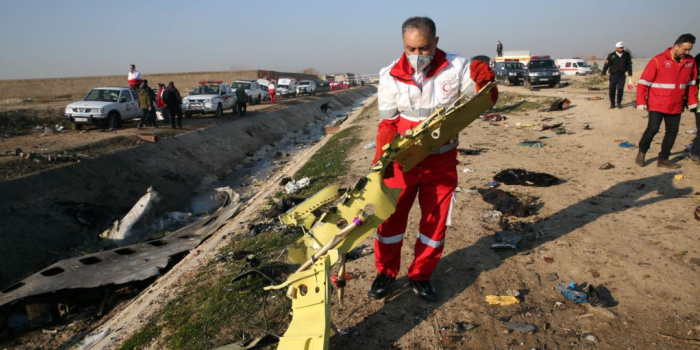 Photo credits: AFP/Radio Liberty
Reporters Without Borders (RSF) deplores the harassment of dozens of Iranian journalists, who have been interrogated, threatened, searched and forced to close social media accounts for daring to protest about the fact that they have been discredited as information sources because they reported a state lie as the truth.

For three days, without knowing it was a lie, Iranian journalists reported the Islamic Republic’s denial of any responsibility in the Ukrainian passenger jet crash in

Tehran on 8 January that killed all 176 people aboard. After the authorities finally admitted that it was shot down by an Iranian missile, 80 journalists dared to issue a joint statement expressing regret that they had helped to spread a state lie.

“We, too, are tired and dismayed by the state media lies,” their statement said. “All newspapers, in coordination with the state radio and TV, and in the absence of any independent investigation, repeated this great lie, and have then been outraged and despised when the truth came to light.”

Outraged by the Revolutionary Guards’ admission of responsibility, Iranians staged protests throughout the country and in Tehran, chanting slogans denouncing the “disgraced liars.” After using force to disperse these protests, the authorities stepped up their pressure on the media, banning the publication of anything that did not toe the government line.

According to the information gathered by RSF, at least 21 journalists throughout the country have been summoned and questioned by intelligence officials working for the Revolutionary Guards or the ministry of intelligence since 8 January.

None of them has so far been arrested but all of them know they could be arrested at any time. Some have been warned by the media outlets they work for of the need to “pay attention to what you say on social media.” Some of have had to close their Instagram, Twitter or Facebook accounts, or to stop posting on them.

Under pressure, newspapers are now only publishing information “confirming” the overall position taken by the regime and, in particular, Supreme Leader Ali Khamenei. No interviews with relatives of victims of the crash have been published.

Revolutionary Guard intelligence officials have searched the homes and offices of many journalists, seizing computers, mobile phones, books, documents and manuscripts. All of these journalists expect to be summoned for questioning soon. They include Mazyar Khosravi, who used to work for the Shargh daily newspaper, the freelancer Yasamn Khalegheian, the T’adol daily newspaper’s Hajizadeh Moloud, and the Dideban e Iran news website’s Yaghma Fashkhami. Both Moloud and Fashkhami were already arrested and imprisoned during the past two years.

Traditional censorship methods have been revived. Media have received a list of banned subjects and ultimatums from various state entities including the High Council for National Security, the prosecutor’s office, the Ministry of Culture and Islamic Guidance, the ministry of intelligence and the Revolutionary Guards intelligence agency. As well as the summonses, everything has been done to threaten reporters and force editors to control their reporters themselves.

Speaking on condition of anonymity for safety reasons, a Tehran-based journalist said: “I received a summons to go to the ministry of intelligence. It was given to me by my editor, who had already warned me to take care with what I said in my tweets. I told him I wouldn’t go because being summoned like that was illegal. That evening someone called me and, without even saying hello, began to insult me. The next day at the ministry of intelligence, it was even worse. I was accused of everything and anything and was forced to sign an undertaking to close all my social media accounts. I’m now waiting to be summoned before a court.”

In southern Iran, another journalist said: “I was summoned and interrogated by Revolutionary Guard intelligence officials, mainly about my Instagram posts in which I said I regretted having relayed the official lie. They told me: if you want to stay alive and not spend the next ten years of your life in prison, shut your mouth and your social media accounts! That’s all. Don’t collaborate with the enemy!”

The Revolutionary Guards meanwhile continue their manhunt on social media, where the first revelations about the regime’s “human error” were posted by Iranian journalists based abroad and were picked up by citizen-journalists who are at the heart of the battle for freely reported news and information in Iran. At least 20 Internet users have been summoned and arrested in various Iranian cities in the past two months.

One year ago, on 7 February 2019, as the Islamic Republic was marking the 40th anniversary of its revolution, RSF held a press conference to report what it had learned from a leaked Iranian justice department digital file about the scale of the state lie orchestrated for decades about judicial repression in Iran.

“One year after these revelations, Iranian journalists are again the twofold victims of a state lie,” said Reza Moini, the head of RSF’s Iran desk. “In Iran, a country that Supreme Leader Ali Khamenei describes as ‘free,’ the entire world is discovering how the suppression of media freedom has helped to institutionalize lies and serious, repeated human rights violations.”

Iran is one of the world’s eight biggest jailers of journalists, with 23 currently detained, and is ranked 170th out of 180 countries in RSF’s 2019 World Press Freedom Index.

Journalist Oleksiy Bobrovnikov granted political asylum in Germany
Want to learn first about the new research of the Institute of Mass Media? Subscribe to the newsletter!