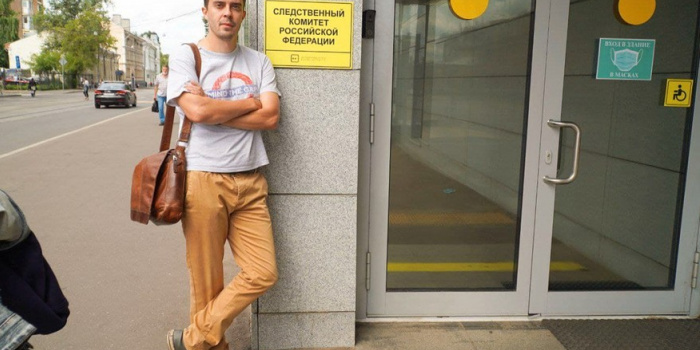 On the morning of Wednesday, July 28, Moscow police raided the home of Roman Dobrokhotov, the editor-in-chief of the independent news outlet The Insider. “Apparently, there’s a search. The police are knocking,” Dobrokhotov wrote on Twitter at 7:29 a.m., local time. The journalist also posted his address and said that he “could use a lawyer,” after which he stopped responding to calls. Dobrokhotov’s wife reported the incident to the OVD-Info hotline, but the conversation was cut short. Lawyer Oksana Oparenko from the human rights group Pravozashchita Otkrytki went to the Dobrokhotovs’ apartment. Police also raided the home of the journalist’s parents on Wednesday morning (his parents weren’t given procedural status following the search) as Meduza.io reported.

Roman Dobrokhotov, the editor-in-chief of the investigative outlet The Insider, was reportedly planning to leave Russia on July 28. But at 7:30 in the morning, the police came knocking at his door. Law enforcement raided Dobrokhotov’s apartment, seizing not only his devices but also his international passport. The Insider believes the raid is in connection with a libel case initiated on behalf of Max van der Werff — a Dutch blogger who The Insider has linked to the Russian GRU. Roman Dobrokhotov’s lawyer says the journalist is currently considered a witness in the case. The raid on Dobrokhotov’s home comes less than a week after the Russian Justice Ministry designated The Insider as a “foreign agent.”

According to his colleague from The Insider, investigative journalist Sergey Yezhov, Roman Dobrokhotov was planning to leave Russia on July 28. However, during the raid, investigators seized Dobrokhotov’s international passport, as well as his cell phone, laptop, and tablets. Following the search, Dobrokhotov was taken in for questioning.

The search is believed to be in connection with a libel case that was initiated on behalf of Dutch blogger Max van der Werff, The Insider said. Van der Werff is known for promoting so-called alternative narratives alleging that Russia had no involvement in the 2014 downing of Malaysian Airlines Flight MH17. According to reporting from The Insider, van der Werff cooperated with the Russian GRU and was paid by the Russian Defense Ministry to disseminate information about the fatal plane crash.

Citing a source in law enforcement, RIA Novosti reports that Moscow police opened the felony slander case on April 26. This was confirmed to the news agency by van der Werff’s lawyer, Stalina Gurevich. According to lawyer Oksana Oparenko from Pravozashchita Otkrytki, who is representing Roman Dobrokhotov’s interests, the journalist is considered a witness in the case.

The news site Open Media says that the criminal case was launched over a Tweet Dobrokhotov posted on November 13, 2020. It said: “The fact that the GRU paid a Dutch journalist is half the trouble, but the fact that through him they deliberately promoted disinformation about a fighter jet, which even the Defense Ministry has officially, publicly renounced — that’s low.” This tweet has since been deleted. Van der Werff’s lawyer Stalina Gurevich confirmed to Open Media that the complaint against Dobrokhotov was filed because of this post.

Max van der Werff filed a defamation lawsuit with Moscow’s Cheremushkinsky District Court in March. Roman Dobrokhotov told Kommersant that the Dutch blogger is seeking to recover 100,000 rubles ($1,358) from him, as well as for him to refute The Insider’s article. The first hearing on the claim is set for August 17.

The Russian Justice Ministry blacklisted The Insider as a “foreign agent media outlet” on July 23. Roman Dobrokhotov told Meduza that the designation could be linked to the fact that the publication is registered in Latvia. “It’s all very simple: if a Russian-language media outlet that criticizes Putin has a foreign legal entity this is enough [for a 'foreign agent' designation],” he said. The editor-in-chief also underscored that the investigative outlet plans to continue to work as usual (from abroad) and will not be subject to Russian laws.

The Insider is known for its joint investigations with the international investigative group Bellingcat. In addition to publishing numerous reports about Russia’s involvement in the downing of Flight MH17, The Insider and Bellingcat broke the story about the FSB unit implicated in the August 2020 poisoning of Russian opposition politician Alexey Navalny.