The delegation of a ten leading international organizations working in the field of freedom of expression, which are partners of Platform to promote the protection of journalism and safety of journalists is visiting Ukraine, on April 4, 2017. Press service of the Council of Europe informed IMI about this event.

Platform is a public space to facilitate the compilation, processing and dissemination of information on serious concerns about media freedom and safety of journalists in Council of Europe member States. It aims to improve the protection of journalists, better address threats and violence against media professionals and foster early warning mechanisms and response capacity within the Council of Europe.

The Platform provides the opportunity to find all messages on threats related to the EU member states, information regarding the response of member states (governments) to these messages, newsletters and statistics according to topics: attempts on the physical safety of journalists, journalists' detentions and imprisonments, harassment and intimidation of journalists, impunity and other actions that have a negative impact on the media freedom.

The Platform enables the Council of Europe bodies and institutions to be alerted on time, in a more systematic way and to take timely and coordinated action when necessary. It shall help the Organisation identify trends and propose adequate policy responses in the field of media freedom.

On 4 December 2014, the Council of Europe and the Platform's Partner Organisations (Reporters Without Borders, the International Federation of journalists, the European Federation of journalists, the Association of European journalists and Article 19) signed a Memorandum of understanding. On 13 October 2015, the Committee to Protect Journalists and Index on Censorship joined the Platform as well. In conformity with the Memorandum, the platform allows the contributing partners to post alerts, subject to their own verification processes and standards. Each contributing partner is responsible for information which it posts.

When submitting an alert to the Platform, the Partner Organisation decides whether, from its point of view, the information provided fulfills the following criteria:

When the circumstances allow it, the Council of Europe and a member State which is directly referred to in information posted on the Platform may post reports on action taken by their respective organs and institutions in response to that information.

The Platform provides each country-member with its own profile, which is located within the statistics and infographics on all registered reports of threats, including active and settled, and the answers received from the state (government) and the next steps that they have planned.

Since the launch of the Platform in April 2015, it has placed 17 messages on Ukraine, including threats to media freedom in Crimea and in areas outside Ukrainian control - Donetsk and Lugansk oblasts, namely:

In February 2017 Ukraine responded to 15 reports of threats. 2 of 17 cases were settled. 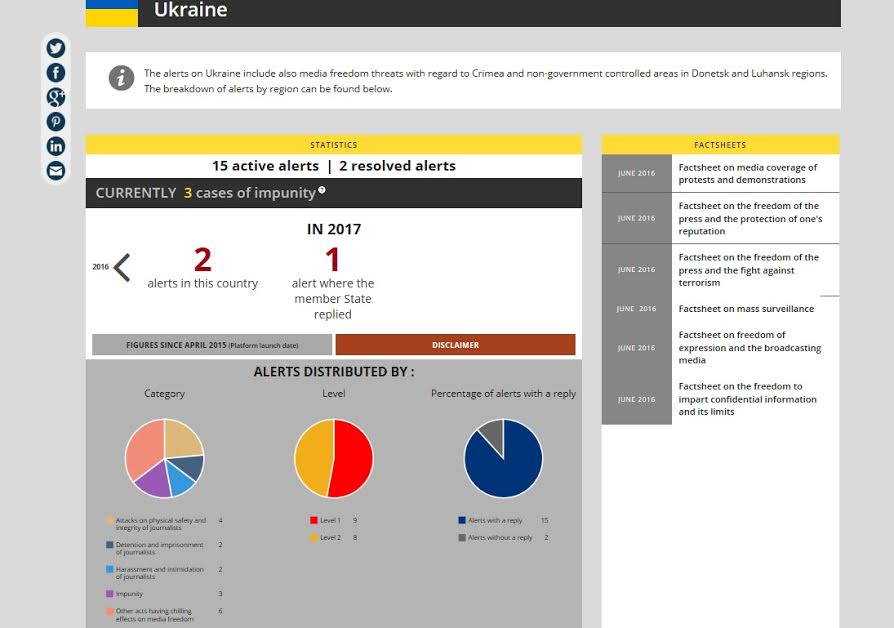