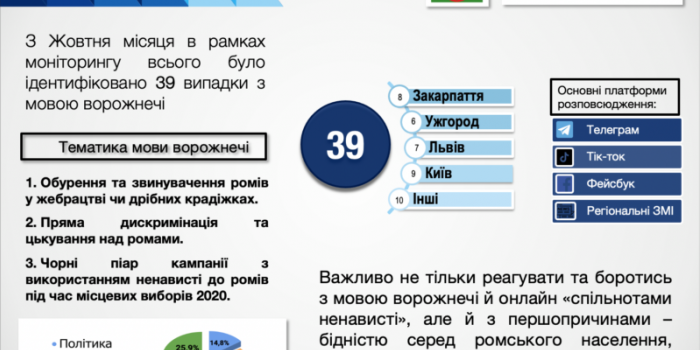 From October to December 2020 inclusive, the monitoring group of the Roma Women's Foundation "Chirikli" recorded 39 cases of hate speech on social networks and mass media, as it was announced during the presentation of the interim results of the monitoring of hate speech online against Roma in Ukrinform, as ZMINA human rights center reported.

The most frequently the hate speech was seen in the publications speaking of minor thefts made by Roma: they accounted for 59.3% of identified cases.

And the most popular space where hate speech was shared was Facebook. “Such posts appear especially systematically on pages that can be described as "communities of hatred." These are the groups created to fight so-called "Roma crime". This is the most common context in such publications, which are mostly one-sided, and the Roma are portrayed as a whole group with irreparable antisocial behavior, an integral feature of which is crime-related activities”, the report said.

Monitor experts noted that numerous posts on the Internet directly mocked Roma, portraying them according to negative stereotypes : 25.9%:

"For the most part, such publications were accompanied by a characteristic visual image of the Roma in accordance with the negative stereotypes that exist in society."

A number of other publications concerned Roma in connection with the 2020 local elections - 14.8% of the reported cases involving hate speech.

The report said that many Roma have decided to run in the last local elections as candidates from various political parties:

"At the same time, this was reflected in the hatred of the Roma, but the predominantly Roma theme was used as a means of a black campaign against certain political forces."

For example, the negative attitudes towards Roma in Lviv were used against one of the candidates, who had nothing to do with the Roma minority: Another publication used public tensions against Roma in the city to discredit another candidate.

Geographically, hate speech publications most often corresponded to the cities with the largest number of Roma settlements and their migration routes, they said during the presentation.

Thus, these are public pages of social networks and media resources of Transcarpathia, where, according to the latest census and estimates of international organizations, there is a largest number of Roma living in Ukraine. The next city in terms of the number of publications containing hate speech was Uzhhorod, followed by Lviv and Kyiv.

“In our opinion, the fact that the largest number of publications using hate speech is documented in the Zakarpattia region evidences the regularity of the structural problems faced by Roma there: high unemployment, lack of decent housing and proper access to education. As a result of these factors, which affect the low standard of living of Roma and the inability to maintain their households, Transcarpathian Roma tend to migrate to large urban centers in Ukraine in search of other sources of income, ”the report noted.

The experts added that one of the general trends highlighted by the monitoring was also the use of zoomorphic metaphors when it is question of Roms:

“We have recorded the examples such as "locusts" or "cockroaches". It should be noted that such hate speech is often combined with a call to expel Roma from the city or country. Undoubtedly, such statements are dangerous because of the dehumanization of the Roma as a group. ”

The report concludeв that the level of xenophobia and anti-Roma statements remainув high due to the lack of a formal mechanism for registering and responding to hate speech, as well as insufficient coordination between the authorities, law enforcement and human rights defenders.