In Ochakov, journalist fell into ravine and broke her leg 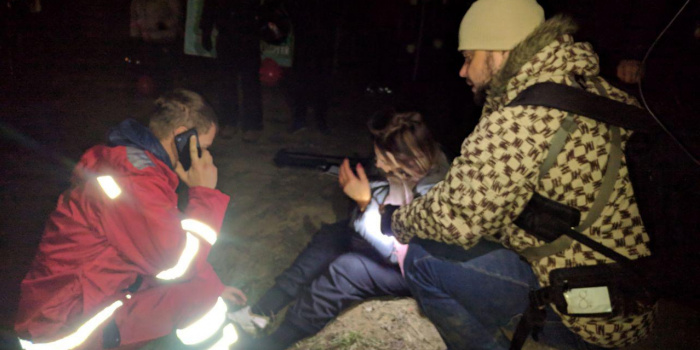 Angela Slobodyan, journalist with “Ukraina” television and radio company, broke her leg, as she fell into ravine near a military port in Ochakov (Mykolaiv region), as NickVesty newspaper reported.

The incident occurred on the evening of November 20, the journalists were waiting for the president Volodymyr Zelensky who had to arrive to Ochakiv on occasion of return of navy boats seized earlier by Russia.

“Actually, it’s awful. The journalists are waiting for three hours at the military port in Ochakov. The president is late. They do not let us inside, as they say due to "preparatory measures". The territory, to put it mildly, is not adapted to the presence of such a group of people. Everywhere here, there are pits, ditched areas, complete darkness, ” as Oleg Derynyuga, journalist for NickVesti, wrote on his Telegram page.

He said, after the mobile TV station of the channel "1 + 1" went, it got dark:  As a result, the journalist of “Ukraina” channel Angela Slobodyan fell into the pit and broke her leg.

Angela Slobodнan was sent to the hospital. She was diagnosed with an open fracture of her leg, as to RBC-Ukraine.

On November 20, three Ukrainian vessels, which had been seized by Russia in November 2018 near the Kerch Strait, were returned to Ukraine base in Ochakiv.