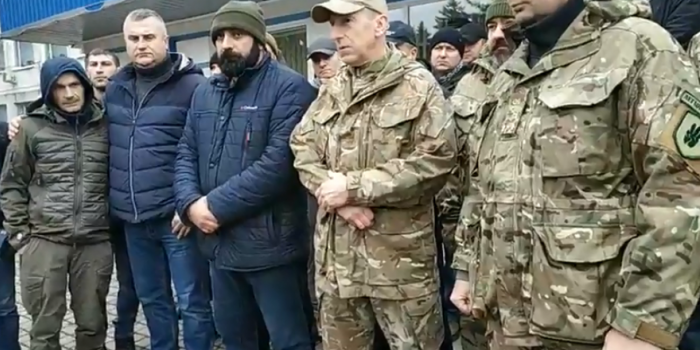 On February 14 in Lutsk, a group of anti-terrorist operation (ATO) veterans and activists held a rally in front of the building of the Avers TV channel demanding to refute the information made public in the story "We work - you are enjoying yourself: a brothel for generals in Lutsk", as the representative of IMI in the Volyn region reported it.

In the story aired on February 12, the journalists revaled that one of the local beauty salons allegedly worked a local brothel. The presenter of Avers said announcing the story that “the peace of the priestesses of pleasure was guarded by a security firm founded by the fighters of the police battalion “ Svityaz ”. It was said that an ATO veteran Yuri Bukiy and two other men from the Svityaz battalion were co-founders of the security company.

The reporters showed the numbers plates and the car of Yuri Bukia, saying that "the jeep that came after the girls was registered as the car of someone Yuri Bukiy." And in the next story , released on February 13, it was noted that the car of ATO veteran was driving in a circle that night. However, there was no evidence that the car drove the girls somewhere.

On February 13, Yuri Bukiy wrote on Facebook that Avers employees were coming to his house in the evening. He took a picture of the car and signed that it was a TV channel.

ATO veterans and activists came under the Avers office to speak to the officials of the TV channel.

During the rally, Yuri Bukia said that he had no relation to the beauty salon and he requiredfrom Avers to retract or to apologize.

“Our demands will not change until they shoot another story with an official apology and refutation of they told, ” he said.

The representative of IMI in Volyn region asked the director Avers TV channel Natalyia Moskovka to comment on, but the latter has not answered yet.

According to the portal T1.ua , veterans and volunteers could communicate with the representatives of the channel.  Natalia Moskovka and the author of the story Natalia Polishchuk said them that they would not refute without proper grounds.

“Such a right exists, regardless the fact the victim seized or not the court, and can occur out of court. If the TV channel disseminated any untruthful information, it must refute it on its own or at the request of the aggrieved person. The refusal to refute the information in the case where false information was disseminated entails additional liability and, in particular, is taken into account by the court when determining the amount of non-pecuniary damage to the victim, ” the lawyer said.