IMI records 484 freedom of speech violations in half a year. Most committed by russia

IMI has recorded 484 cases of freedom of speech violations in six months. Of these, 419 crimes were committed by russia in the period since the beginning of the full-scale invasion of Ukraine on February 24. Only the 65 other cases fall under the responsibility of the Ukrainian side.

These are the results of the monthly monitoring by the Institute of Mass Information. 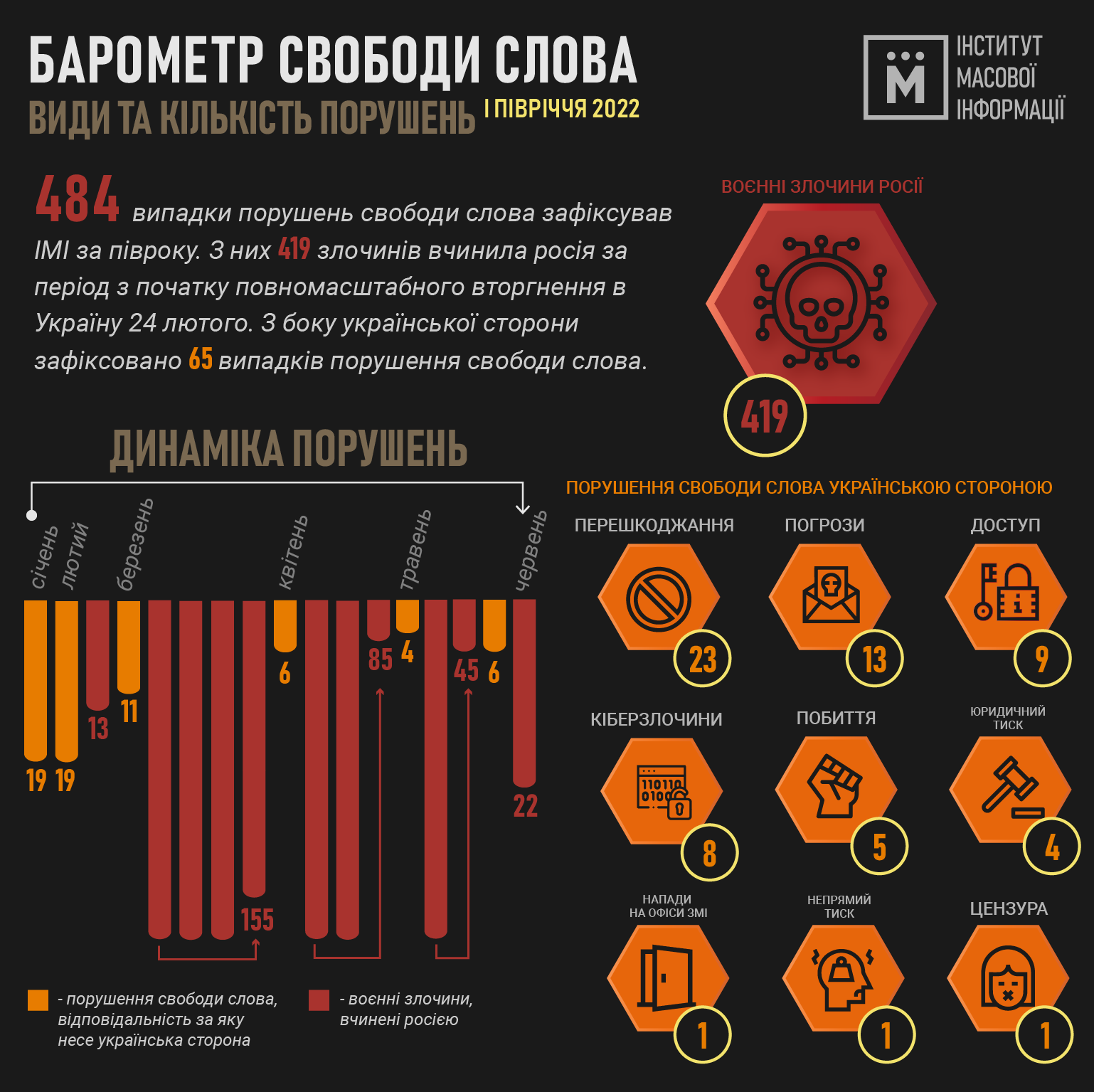 At least 15 journalists are missing (journalist Dmytro Khylyuk, who went missing in Kyiv region during the russian occupation, and 14 journalists from Mariupol).

Film crews of both Ukrainian and foreign media covering the war continue to come under Russian fire. IMI has recorded 23 such cases since the full-scale war. Journalists mostly came under fire in regions where hostilities continued or are still continuing. In particular, these are Kyiv, Zaporizhzhia, Chernihiv, Mykolaiv, Kharkiv, Luhansk and Donetsk regions.

In addition, the russians continue to threaten Ukrainian journalists. IMI has recorded 60 such cases. If at the beginning of the full-scale war the occupiers threatened journalists physically (by coming to their or their parents' homes), now this has shifted more to the Internet realm. Journalists are receiving emails with threats of interrogations, imprisonment (namely, in Siberia), website blocks. The editorial offices of both national and regional media outlets have received threats.

In addition, the russian occupiers keep disabling Ukrainian broadcasting in the temporarily occupied territories and streaming their own propaganda. These are Kherson, Luhansk, Donetsk, Kharkiv, and Zaporizhzhia regions.

Since the beginning of the russian federation's large-scale invasion, at least 214 broadcasters, online and printed media (national, regional, and local) have stopped their operations in whole or in part due to hostilities and occupation. These are media from Zaporizhzhia, Kherson, Kharkiv, Kyiv, Donetsk, Mykolaiv, Sumy, Luhansk, and Chernihiv regions.

In six months, IMI has recorded 65 cases of freedom of speech violation in Ukraine for which the Ukrainian side is responsible.

These are cases of beatings, threats, obstruction, attacks on media offices, denying access to public information, legal and indirect pressure, censorship, and cybercrimes.

Most often, journalists had their work obstructed (23 cases) or were threatened (13 cases).

Journalists were not allowed to attend sessions and commissions of city councils and court hearings, were denied accreditation for events, banned from filming, attacked during live streams, threatened with a machine gun, demanded to delete a video, mistaken for saboteurs and forbidden to film the consequences of shelling, etc.

In addition, IMI has recorded nine cases of restriction of access to public information, eight cases of cybercrimes, five cases of beatings, four cases of legal pressure and one case each of attacks on media offices, indirect pressure, and censorship.

Journalists' access to public information was restricted by city authorities, law enforcement officers, communal and state enterprises, the Verkhovna Rada, and ministries. For instance, journalists were not provided with the requested information, their requests were declined or received no response.

The case of censorship concerns the shutdown without warning of the channels "Priamy," "Espreso," and Channel 5 from the T2 digital network on April 4. The Media Movement and the Commission on Journalistic Ethics called on the President of Ukraine Volodymyr Zelenskyy to intervene in the situation with the TV channel block, explain the reasons for it, and restore their broadcasting.

None of the state departments have stated the reasons for the shutdown. Only in May, the State Service for Special Communications and Information Protection of Ukraine explained that the shutdown of the digital broadcasting of Espreso, Priamy, and Channel 5 was justified by the implementation of the decision of the National Security and Defense Council of Ukraine on the broadcast of a joint telethon.

Channel 5 and Priamy have filed a lawsuit against the Broadcasting, Radiocommunications and Television Concern (BRTC) and the State Special Communications Service for disconnection from digital broadcasting.

Freedom of speech restrictions have been recorded in 18 regions of Ukraine. The majority of cases were recorded in Kyiv region (25 cases), as well as Lviv and Odesa regions (six cases each).