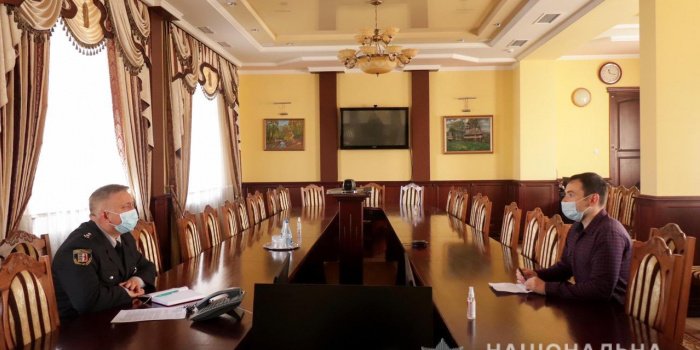 service of communication of the National police in Transcarpatthya region

Yaroslav Gulan, the IMI's representative in the Transcarpathya region, spoke of eventual impediments the journalists face in their work due to lockdown restrictions. The question was raised at the meeting with the head of the Department for the Protection of the Interests of Society and the State of the main directorate of the national police (DPISS) in the Transcarpathya region, police lieutenant colonel Oleksander Batory on April 21

"Although the law does not prohibit mass media professionals to attend public sittings of the government bodies, such as parliamentary sessions, executive committee meetings, court hearings, in Ukraine, and including Transcarpathya. We’ve seen attempts to limit access for journalists to the places where they have the right to be, under the pretext of lockdown. This context should not be ignored either, as the restriction of legal access to information has a negative impact not only on the rights of a media professional, but also on the target audience of a journalist or the media, ”said Yaroslav Gulan.

Last year, in Transcarpathya there was an attempt to prevent journalists to attend the first meeting of the newly elected regional council.

During the meeting, the police spokesman confirmed that as of April 1, three criminal proceedings were being investigated for violating the rights of journalists in Transcarpathia that are under the IMI’s control.

In particular, these are criminal proceedings for failure of information managers to reply to the information requests of Transcarpathian journalists Stanislav Danko and Olena Mudra.

Oleksander Batory informed that the department in the structure of the Ministry of Internal Affairs has been established a year ago and one of the tasks were the crimes against media representatives. Although, according to him, in Transcarpathia the sector does not directly investigate journalistic cases, but supervise them.

In addition, the police representative called on journalists not only to report violations of their rights and file complaints to the police emergency phone line 102, but also to write to the DPISS mailbox: [email protected] According to Oleksander Bathory, this is necessary for the representatives of the department on the ground to keep the situation under control.

For his part, Yaroslav Gulan said that he would inform the Transcarpathian mass media about it, in particular about the algorithm of actions in case of infringement to their professional rights.

As IMI reported, on February 4 in Transcarpattya, investigative journalists Stanislav Danko and Olena Mudra called on the Ministry of Internal Affairs to respond more effectively to violations of their rights. They sent an appeal to the Minister of Internal Affairs Arsen Avakov and to the leadership of the Transcarpathian police informing him about an improper response of some local police units to complaints of violations of journalists' rights. The letter listed several facts, in particular, about the closure of criminal proceedings for failure to respond to Stanislav Danko's request addressed to the Road Service, the refusal of the Vynohradiv city police to open criminal proceedings on complaint from journalist Olena Mudra for failure to respond from the City Council on information request. The journalists received a response from the Ministry of Internal Affairs to their appeal, but they were not satisfied with this response.