IMI lawyer: police should have investigated complaint of Kutepov 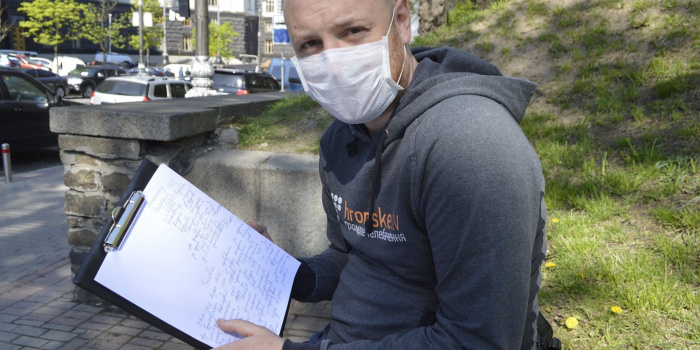 The National Police should have accepted the complaint from Bogdan Kutepov, journalist with Hromadske, who was attacked by police on April 29, and its obligation was to launch a pre-trial investigation into the obstruction of his professional activities. Ali Safarov, media lawyer with the Institute of Mass Information, told Detektor Media.

Earlier, the deputy editor-in-chief of Hromadske, Nastya Stanko, said that Bohdan Kutepov spent 15 hours to file complaint and to testify. The police and the investigative unit refused to accept the journalist's complaint and sent him to the State Bureau of Investigations.

According to Art. 214 (start of pre-trial investigation) of the Code of Criminal Procedure, the police had no right not to accept the complaint, this is illegal, Safarov said.

"The police should have accepted the complaint from Kutepov when he tried to file it. And then, having started the investigation, probably, to defer the case to SBI. The fact of obstruction to journalistic activities occurred. We see people wearing the uniform in the video, but we do not know for sure wether they are the law enforcement officials, until the suspect is identified. This should be done during the pre-trial investigation, ”the media lawyer explained.

Instead, Oksana Blyshchyk, head of the National Police's communications department, told that the incident should be investigated by the State Bureau of Investigation because the police officers are involved.

"The SBI must investigate it. We are conducting an internal investigation, the results of which will be passed to the SBI. Since the police officers are involved, this is up to SBI to make decisions. Or the prosecutor's office can enter information into the unified register of pre-trial investigations, ”she said.

We will remind, SBI opened proceedings not according to Art. 171 of the Criminal code of Ukraine (obstruction of professional activity of the journalist), but based on the part 2 of the Art. 365 of the Criminal Code (excess of power or official authority by a law enforcement officer, accompanied by violence).

Ali Safarov explained that Article 216 of the Criminal Procedure Code determined based on which articles the SBI or the National Police were entitled to instigate the proceedings. In particular, according to it, the State Bureau of Inevestigations must initiate proceedings if the crime was committed by a representative of a law enforcement agency. However, the SBI cannot initiate an investigation into the "journalistic articles" of the Criminal Code - Art. 171, 345-1 (threat or violence against a journalist) and 347-1 (intentional destruction or damage to a journalist's property) of the Criminal Code: this is up to the police to deal with it.

"Actually,the situation is that the SBI initiates proceedings against a law enforcement officer, but not under" journalistic articles ". However, this does not exclude “journalistic articles” element to be joined,  as the pre-trial investigation is on. If they find out some of such elements being seen in this crime, the IBI investigators will include these crimes to the case as well, ”the media lawyer said.

He added that actually, the police can initiate proceedings for obstruction to journalistic activity, proceeding in parallel with the SBI. After that, the prosecutor must determine the jurisdiction of these proceedings: "That is, to join them into one proceeding and determine which body should investigate it."

As IMI reported, on April  29 under the Cabinet of Ministers in Kyiv; the police beat up a citizen journalist with Hromadske, who was on live standup and broke his equipment.