IMI: 52 cases of violations of freedom of speech during the first quarter of 2017

IMI recorded 52 cases of violations of the freedom of press that took place in 18 regions of the country, during the first quarter of 2017 in Ukraine. The main violations during last three months were - obstruction to lawful professional activities of journalists - 15 cases, 9 cases of restricting access to public information for journalists and 7 cases of threats.

These are the data of the annual survey "Freedom of Speech Barometer" conducted by the Institute of Mass Information. 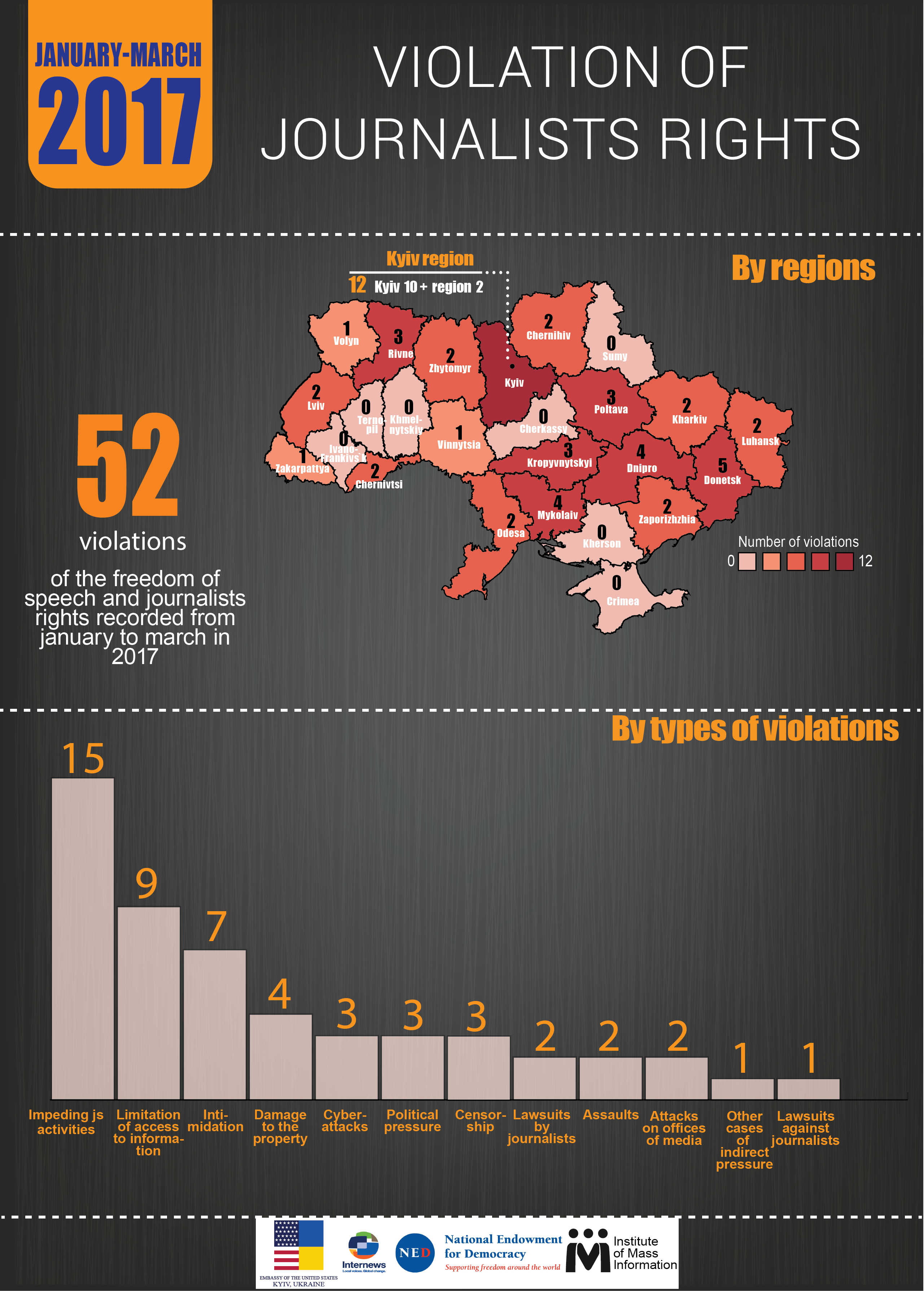 Among the leaders of violations during this period of time are Kyiv and Kyiv region (12 cases), Donetchyna (5 cases), Dnipropetrovshchyna and Mykolaivshchyna has 4 cases each. Mostly nameless citizens, guardians and representatives of the local authorities, deputies, public servants, judges, the Verkhovna Rada, SBU, memebers of political parties, etc. violate the right for journalists' professional activity.

In Russian-occupied Crimea there were registered 7 cases of violation the right for professional activity.

IMI experts registered the escalation of violations in the category of access to public information, including 9 cases since the beginning of the year, compared to 3 cases in the first quarter of 2016.

At the same time, IMI registered improvements in physical aggression against journalists - 2 attacks on journalists were registered since the beginning of the year comparing to the first quarter in 2016, when experts registered 7 cases of beatings.

The increasing number of cases of destruction or impairment of the property owned by a journalist shows a negative trend - 4 cases are registered since the beginning of the year, compared to one case in January, in 2016.

In addition, IMI draws attention to the growing cases of political pressure - three cases recorded for the first quarter 2017. IMI's experts recorded only three such cases for the full 2016.

This year, the cases of political pressure related to the introduction of electronic declaration for representatives of anti-corruption NGOs and their counterparts, the case of pressure from the side of Radical Party of Oleh Lyashko on the member of the Supervisory Board of the National Public Broadcasting Company and the case linked with local authorities in Kirovohradshchyna.