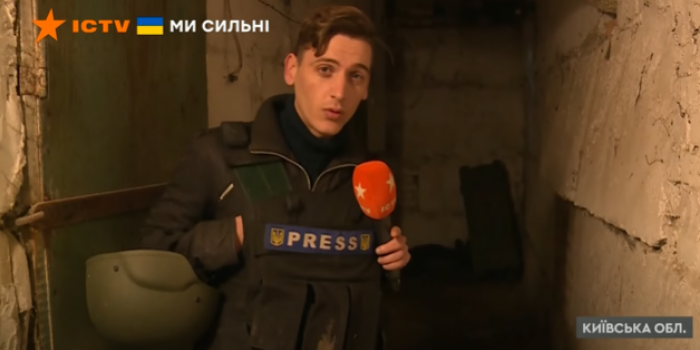 Screenshot from the ICTV video

The TV crew of ICTV's Fakty program came under artillery fire from the Russian military on March 15 in Kyiv region, as they reported on TV channel ICTV.

Journalist Oleh Kornienko and cameraman Artur Turovych came under fire in the middle of the field. As soon as the journalists arrived at the position, the Russians launched an artillery attack.

"It is virtually impossible to work in positions. The enemy immediately opens fire and hits chaotically. We do not leave the shelter, because we hear explosions and shelling literally every minute," ICTV journalist Oleh Kornienko said.

Journalists managed to hide in a shelter and wait for the shelling, which lasted more than an hour. However, the Armed Forces managed to eliminate enemy artillery and the military.

It should be noted that the film crew of the ICTV "Facts" program came under fire together with the TV crew of the TSN channel 1 + 1.