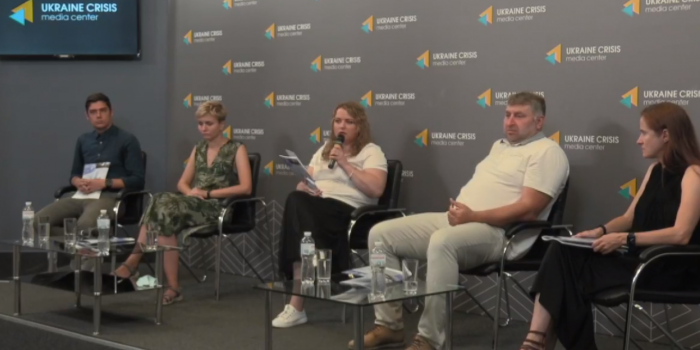 Screenshot from the video of the Ukranian crisis media center

In the first half of 2021, 53 incidents targetting human rights activists have been recorded by the ZMINA Human Rights Center in the territories controlled by Ukraine. Of these, 21 cases occurred in the second quarter of the year. This was reported by the press service of ZMINA.

Kyiv remains the leader by number of cases (22), followed by Odessa region (seven cases), and Kharkiv region and Luhansk region (three cases each).

"The figures are constantly going up, we see this trend for two reasons: first, in fact, some negative processes are enhanced, including the activities of far-right groups: both offline, when they try to disrupt some activities or assault, and online. On the other hand - and this is good for the future - activists are more likely to report pressure on themselves, and so, we can identify more cases and respond to them, "- said the researcher.

Anastasia Moskvichova also noted that pressure on LGBT activists is growing, and impunity for attacks by right-wing radicals on activists remains a problem.

“LGBT activism has become the most dangerous form of public activity for the first time since our monitoring started. Anti-corruption activities and protection of women's rights are also the most risky, ” Anastasia Moskovychova added.

Attempts to destroy or damage activists' property were the most common cases of persecution since the first half of the year: human rights activists recorded 14 such incidents. In addition, activists were often intimidated (10 cases) and attacked (eight cases).

ZMINA project coordinator Lyudmila Yankina summed up that in 2021 the trend of resuming persecution of those public activists or organizations that have been facing persecution earlier, is on.

“Obviously, this is the effect of lack of the progress of high quality investigations into the previous incidents of persecution by the law enforcement system. Therefore, we call on the police and the prosecutor's office to pay special attention to the investigation of the incidents mentioned in our report, as the victims are people who are systematically targeted in order to make them stop their activities and to intimidate them, ”she said.