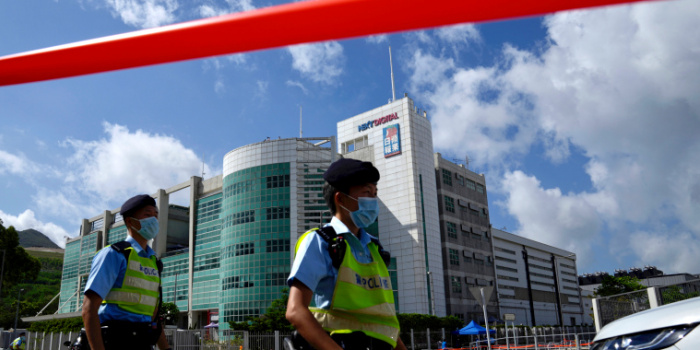 Hong Kong authorities must immediately release journalist Yeung Ching-kee, drop any charges against him, and allow all members of the press to work freely, the Committee to Protect Journalists said  on 23 of June.

This morning, officers from the Hong Kong Police Force’s National Security Department arrested Yeung, the lead editorial writer for the pro-democracy newspaper Apple Daily, on suspicion of “conspiring to collude with foreign countries or foreign forces,” a crime under the national security law, according to news reports.

Also today, Next Digital Limited, which owns the Apple Daily, announced that the newspaper will cease publication and shut down as of tomorrow, as CPJ documented. Last week, police raided the newspaper’s office and detained five of its executives, also for allegedly colluding with foreign powers.

“The arrest today of Apple Daily opinion writer Yeung Ching-kee indicates that journalists in Hong Kong face the same potential fate as their colleagues on the mainland: jail time for critical reporting or opinion writing,” said Steven Butler, CPJ’s Asia program coordinator, in Washington, D.C. “Yeung should be released unconditionally at once, and China should respect the commitments it has made to allow freedom of the press in Hong Kong.”

Officers arrested Yueng, who writes under the pen name Li Ping, at his home in the city’s Tseung Kwan O district, according to those reports. Convictions under the national security law can carry lifetime prison sentences, according to reports.

Yeung has written more than a thousand columns for the newspaper, many of which are critical of Beijing’s crackdown on the city’s pro-democracy movement and press freedom, according to Apple Daily’s database. Yesterday, he published a column in the paper’s print edition asking Hong Kong’s intellectuals, media workers, politicians, and businesses to not cater to authoritarian powers, according to reports.

CPJ emailed the Hong Kong police for comment, but did not immediately receive any reply.

Next Digital and Apple Daily founder Jimmy Lai is currently in prison and on trial for alleged violations of the national security law, as CPJ has documented. In a separate case, Lai was sentenced on April 16 to 14 months in prison for allegedly organizing and participating in illegal demonstrations in 2019.

On June 21, the CPJ board announced that it will honor Lai with its 2021 Gwen Ifill Press Freedom Award.

On December 1, 2020, CPJ found that at least 47 journalists were imprisoned in China, making it the worst jailer of journalists worldwide for the second year in a row.

Until October 27: accreditation for conference on Ukraine's implementation of ECHR decisions
Blogs
Sanctions against Medvedchuk’s TV channels. The first estimates
Do you want to be first to learn about the new research of the Institute of Mass Information? Subscribe to the newsletter!