Homes of journalists with ATR and Crimean Solidarity searched in Crimea 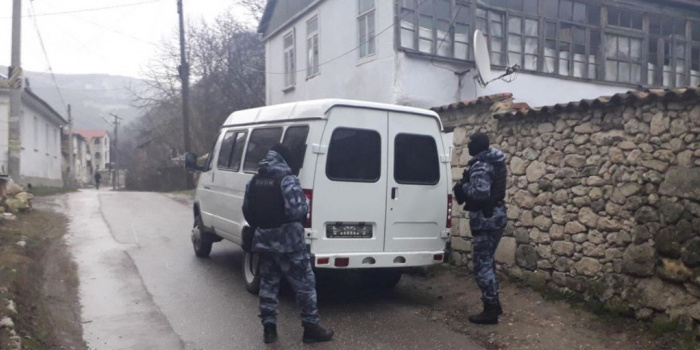 As Crimean human rights activist Lutfie Zudiyeva told Krym.Realii, investigative measures were initiated by the FSB. Searches in seven homes have been held.

As a result, five persons have been detained after search: Enver Mustafayev, Seytumer Seytumerov (historian - Ed. ), Osman Seytumerov, Amet Suleymanov, Rustem Seytmetmetov. They were taken to the FSB division.

"All detainees are charged with 205.5 articles. A search is still underway in the shop where Ahmet Suleymanov works. It turns out that searches are being carried out today on relatives of activists and activists themselves: Ahmet and Ayder Suleymanov - brothers, one of them has already been detained. Also they detained two brothers: Osman Seytumerov and Seytumer Seytumerov, and the search of Shukri Syitumerov and his father just ended, he was not detained, "the human rights activist said.

"As to Seydamet, he was out, they arrested his father, Enver Mustafayev. As for investigative measures regarding the journalist with ATR Seytumer Seytumerov, he was forced to leave the peninsula because of reprisals. Only his elderly mother was present during the search," she added.

The Prosecutor's Office and the National Police of Crimea and Sevastopol (Ukraine) began criminal proceedings due to searches of Russian security forces in Bakhchisaray and Bakhchisaray district on March 11, Krym.Realii reported.

The proceedings were opened due to "violation of the inviolability of housing during unlawful searches in the households of Ukrainian citizens in the city of Bakhchisarai in the temporarily occupied territory of the Crimean peninsula under Article 162 (2) of the Criminal Code of Ukraine".

"Illegal searches in the temporarily occupied territory are of a large-scale and systematic nature and have nothing to do with law enforcement activities, since they are aimed solely at intimidation of the population and persecution of persons," said Crimean Prosecutor Igor Ponochovny.