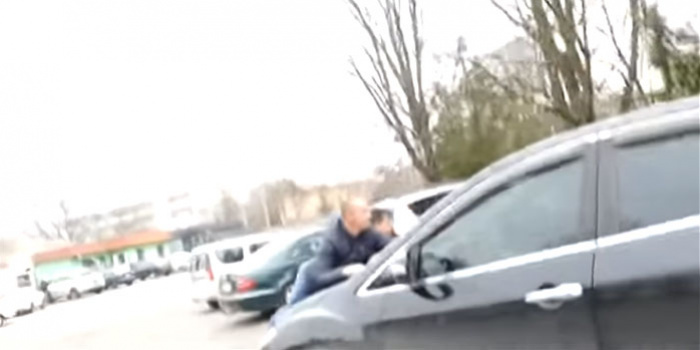 On November 13, in village Dudarkiv (Kyiv region) the head of village Mykola Huralnyk drove his car into the journalists who wanted to ask him some questions on corruption, as TSN reported.

One of the victims, journalist with the Center of journalistic investigations Artem Kvashyn said that two weeks earlier, they had sent an inquiry to the district council demanding to see Huralnyk, but they were denied with the wording "there is no necessity". That’s why, the journalists came to see him on visiting hours.

“We get out, two journalists and cameraman. We approach the car. I stand in front of the car, with me another guy stands, many of locals gathered here, many people. My colleague journalist female asks a question, Huralnik starts the car and pulls away. I was thrown on the hood. I grabbed so well. I think – maybe, he wants to scare me, to stop the car one meter further? No, he goes on driving, gets up to speed. I can no longer jump off, because he drives so quickly. I realize that if I quit the hold now, I will just fall under the wheels. I slammed my fist on the windshield, it cracked and he stopped, ”Kvashyn said.

Also, according to him, one of the locals was hit by the car of the head of the village council and projected him onto another car. Kvashyn noted that all the victims got bruisings, but not fractures.

The journalist added that they have been investigating the village head for a long time. “There are so many points about corruption. Even the National Agency of Corruption Prevention (NACP) opened proceedings against him. This concerns his tax declarations and conflicts of interests, his son who occupies two positions at the village council, he also is elected member of the Boryspil district council. His wife works there too. They have salary of 40 thousand each of them,” he explained.

The local police told TSN that they were establishing all the facts of that incident.

“The police officers are present at the site so far and determine what really happened there, who was injured and what are these injuries, who is a journalist and who is not , who is civic activist. And what was this row? There is currently no legal assessment. That is, the incident has not been entered into the Unified register of pre-trial investigations. Depending on the bodily harms, it will be determined whether it will be an administrative or criminal punishment, ” as the local police officials explained.

The law enforcement officials stressed apart that they were to determine whether there were the journalists who became victims of that collision, or civic activist naming themselves journalists. If this is confirmed, the proceeding will include the article of obstruction to the journalists' legitimate activity.

Photo credit: screenshot from the video by the Center of Journalistic Investigations