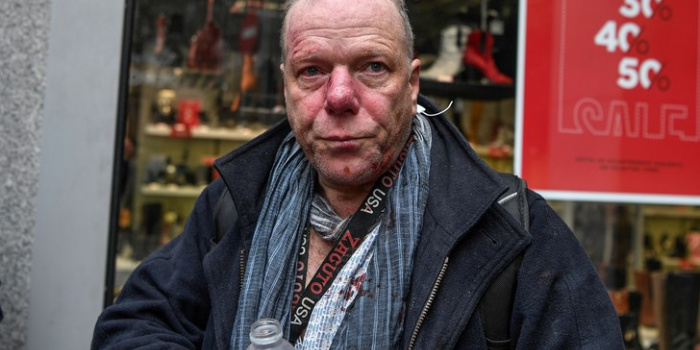 Photo credits: AFP / la-croix.com
Reporters Without Borders (RSF) condemns yesterday’s attack by far-right activists against German journalist Thomas Jacobi during an anti-migrant protest in central Athens’ Syntagma Square, and calls on the Greek authorities to do what is necessary to protect reporters and dissuade extremist groups from attacking them, as Reporters sans frontières reported.

Thomas Jacobi, who reports for the German state broadcaster Deutsche Welle and the French daily La Croix, was punched repeatedly in the face for several minutes by far-right activists, who also took his phones. He finally managed to escape with help from Greek journalists who, like him, were in the square to cover the protest against the presence of migrants in Greece,

Greek government spokesman Stelios Petsas immediately condemned the “fascist attack” and said it was being investigated. Jacobi said he would file a formal complaint. Several journalists’ groups, including the Foreign Press Association, also deplored the attack. The Association of Athens Newspaper Editors (ESIEA) described it as the latest instance of “harassment, brutality, provocative behaviour and constant targeting of journalists by far-right groups.”

“Attacks by far-right activists against the media are too often ignored,” RSF editor-in-chief Pauline Adès-Mével said. “We therefore urge the authorities to take immediate steps to protect journalists in the course of their work and to effectively combat impunity for their attackers. This means that the far-right activists often responsible for violence against journalists must be brought to justice.”

Almost exactly a year ago, members of the neo-Nazi group, Golden Dawn, attacked Jacobi while he was covering a protest outside the parliament building over the renaming of North Macedonia. The attack was prompted by his collaboration with filmmaker Angelique Kourounis in the making of the 2016 documentary, “Golden Dawn: A Personal Affair.”

RSF has often in the past had to criticize Golden Dawn violence against journalists, especially those covering migration-related issues. RSF has also voiced alarm about the lack of official condemnation of those responsible for these attacks in a European Union country. Greece is ranked 65th out of 180 countries in RSF’s 2019 World Press Freedom Index.