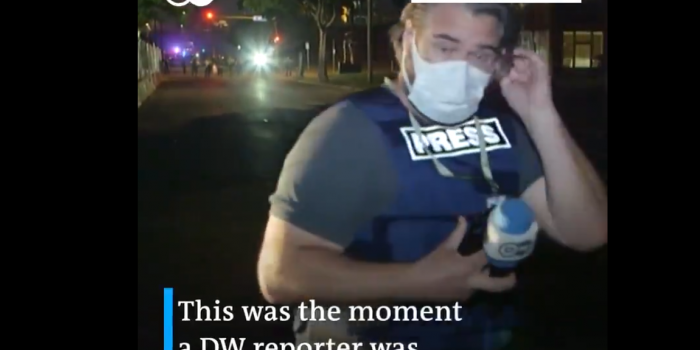 Foreign Minister Maas hopes peaceful protests against police brutality in the US will make a difference. He also said he would contact US officials to support a DW journalist kept from freely reporting in Minnesota, as Deutsche Welle reported.

German Foreign Minister Heiko Maas on Tuesday said peaceful protests against police brutality in the United States were "more than legitimate" and called for press freedom for those covering the demonstrations.

"The peaceful protests that we see in the US, involving many moving gestures, including by American police officers, are understandable and more than legitimate," he told reporters at a news conference.

Maas also tweeted the message from his official account on Tuesday.

"With regard to the incidents involving Deutsche Welle, of which we have also been made aware, we will contact US authorities to find out more about the circumstances," Maas told DW. "We remain firmly committed: Journalists must be able to carry out their task, which is independent coverage of events, without endangering their safety."

"Democratic states under the rule of law have to meet the highest standards when it comes to protecting freedom of press," Maas added. "Any violence that occurs in this context not only has to be criticized — above all it has to be properly followed up and investigated so that journalists are protected when they are doing their work."

Both peaceful and violent protests against police brutality have spread across the US after George Floyd, an unarmed black man, was killed when a white police officer in Minneapolis, Minnesota, kneeled on his neck.

The demonstrations have inspired other anti-racism rallies in other parts of the world, including outside the US embassy in Berlin. More protests are expected in cities around Germany this weekend.

DW's Stefan Simons was shot at by police on two separate occasions while covering the Minneapolis protests. He was wearing a press jacket during both incidents and had identified himself as a journalist.