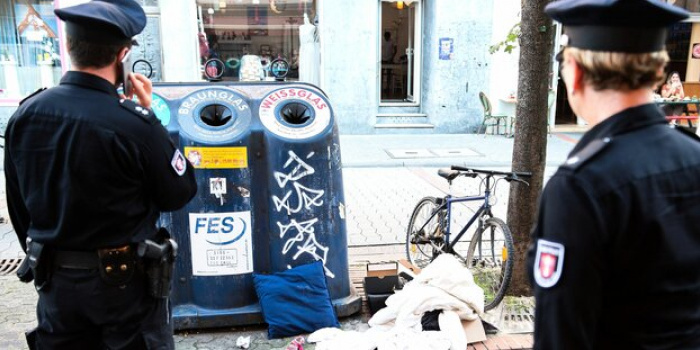 In the piece, columnist Hengameh Yaghoobifarah mused that if the police were abolished — a demand made by some Black Lives Matter activists to address structural racism among police forces — officers would be unqualified to work anywhere but "the landfill." The piece ended with the line: "They would certainly feel most comfortable among their own kind."

On Sunday, Interior Minister Horst Seehofer told tabloid Bild that he would file a criminal complaint against Yaghoobifarah.

"Uninhibited words lead to uninhibited actions and excesses of violence. We cannot accept that," said Seehofer, linking the column to weekend riots in the southern city of Stuttgart, during which several police officers were injured.

On Monday, he softened his tone somewhat, saying: "I have the intention [to file a complaint] but I first have to talk to my lawyers about it."

One major German police union already filed a criminal complaint against Taz last week, arguing the column amounted to incitement. Seehofer did not specify what type of complaint he wanted to file against Yaghoobifarah; the German interior ministry did not immediately respond to a request for comment.

The editor-in-chief of Taz, Barbara Junge, apologized for the column's language this weekend but sharply criticized Seehofer's announcement.

She added: "His decision could not be clearer. His complaint against our author is a shameful attack on press freedom."

Last week, Seehofer — a member of the conservative Christian Democrats — said that federal police would no longer be deployed for operations in Berlin due to the left-leaning regional government's new anti-discrimination law, which bans public officials, including the police, from discriminating against people based on everything from skin color to gender.