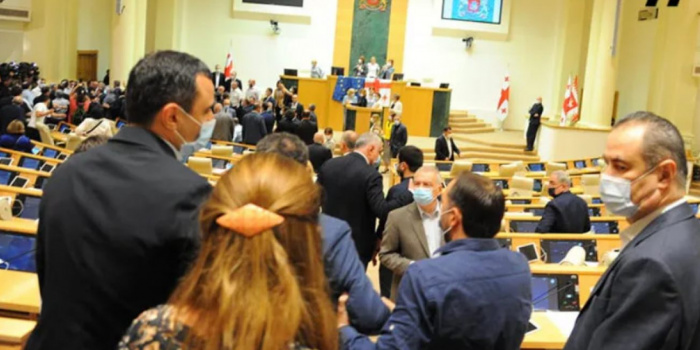 A session of Georgia's parliament has been disrupted after opposition journalists entered the building and scuffles broke out between members of the ruling Georgian Dream party and opposition parties, as Radio Free Europe/Radio Liberty reported.

They incident erupted after a noon deadline for Prime Minister Irakli Garibashvili and his government to step down passed on July 12. The deadline had been set by protesters in response to the death of a television channel cameraman who was severely beaten while covering the Tbilisi Pride parade last week.

Amid the scuffles, opposition lawmakers Tinatin Bokuchava, Khatuna Samnidze, and Anna Natsvlshvili, along with a noted civil rights activist, Elena Khoshtaria, placed the flags of Georgia and the European Union on the podium and demanded the resignation of the government.

The session resumed more than hour later after security officers managed to force the journalists and opposition lawmakers out of the building.

A day earlier, thousands rallied in front of parliament in Tbilisi after Pirveli television cameraman Lekso Lashkarava was found dead at home, six days after he was brutally attacked and beaten by anti-LGBT protesters in the Georgian capital.The demonstrators said they will resume their street protests on July 12 if Garibashvili does not meet their demands.

The incident has highlighted the sometimes violent animosity toward sexual minorities in the strongly conservative Caucasus nation.

Gharibashvili, who has described the death as "a tragedy," accused the thousands of anti-government protesters demanding his administration's resignation of "conspiracy.""This is another failed conspiracy against the state that was masterminded by anti-state and anti-church forces," Gharibashvili said at a government session earlier on July 12.

"They tried to use this man’s tragedy to achieve their political goals," he added, noting that four suspects in the attack on Lashkarava had been detained and stressing that "any type of violence cannot be accepted."

Lashkarava, 37, was one of nearly five dozen journalists and other media workers who were attacked on July 5 when hundreds of people took to the streets of Tbilisi to block a planned LGBT parade.

Two RFE/RL reporters were among those injured.The chaos, which included mobs scaling the building where the organizers of the Tbilisi Pride parade have their headquarters, drew criticism from press advocates and foreign governments.

Many have squarely blamed Gharibashvili, who, the morning of the scheduled parade, said it was inappropriate to hold the event because it would create a confrontation and was "unacceptable to a large segment of Georgian society.”

The Georgian Orthodox Church had also called on its supporters to gather against the Pride march.

Diplomatic missions from 18 countries and the European Union condemned the violence and called on the Georgian government to protect people’s constitutional right to peacefully gather. Radio Free Europe/Radio Liberty