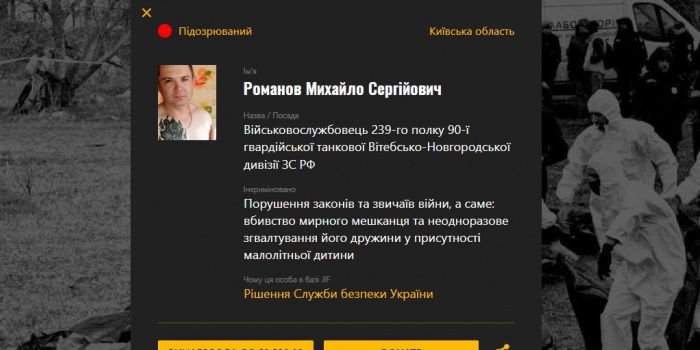 In Ukraine, a fund for collecting information about Russian war criminals and rewarding those who provide it, the Justice Initiative Fund (JIF), was created. This was announced by journalist Stanislav Aseyev, a former prisoner of Izolyatsia torture camp in occupied Donetsk, writes Liga.

According to him, the fund's team will work with the Defense Intelligence of the Ministry of Defense.

He noted that a public initiative cannot put the bought information on the criminals to use on its own, therefore it will be shared with the special services.

Tools for donating can be found on the foundation's website – whistleblowers will be rewarded in the most confidential manner.

"I understand that compared to donations for specific things like bulletproof vests or drones, our work looks like some distant future that one needs to wait for. It is not. On the one hand, by donating $10, you won't see Girkin handcuffed in Kyiv by tomorrow – and we really can't say when that will happen. JIF is being created for decades to come: we realize that we will be searching for these monsters as long as they exist. But when Russia reaches the point of the year 1990 and Russians stand in long lines for moonshine, cursing the already dead Putin, the money for these monsters on the website will be a fortune for them. And we need to start now," Aseyev wrote.

As IMI reported, on December 29, 2019, Stanislav Aseyev was released as part of a detainees swap in the Donbas. "DPR" militants were accusing him of espionage and had held him captive since 2017.

Before being detained by militants, Aseyev used to work with multiple Ukrainian media, namely with Radio Liberty, while living in occupied Donetsk. He was writing articles for the "Radio Donbas.Realii" project under the pseudonym Stanislav Vasin.